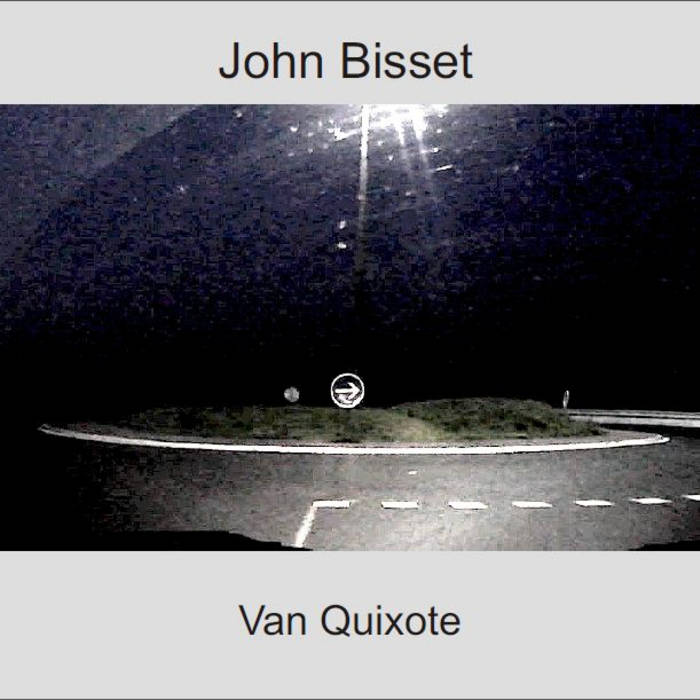 "Van Quixote" consists of the soundtracks to a number of short films made by the British improvising guitarist John Bisset. Available as a download, or as a double disc set complete with a DVD of all the films (21 in all 9 more than the download). The films can be seen here - www.youtube.com/playlist?list=PL7EF02AF7305ABDB4

'…thus wrapped up in agreeable delusions, and hurried on by the strange pleasure he took in them, he hastened to put in execution what he so much desired.' (Don Quixote, part 1 chapter 1)

When I was sixteen I ran away from home, with a copy of Arthur Rimbaud's 'Illuminations' in my pocket. I camped in some woods in Shropshire and spent a sleepless night besieged by bears, wolves and other monsters of my imagination. The next day I moved to a campsite, was bitten by a real dog, and took the train home to Manchester. On the way to the station I bought a small second hand copy of Don Quixote. Even in my dejected state, I laughed as I recognised that I had more in common with the Knight of the Sorrowful Figure, than with the 'live fast die young' poet.
In the spring of 2012 - some thirty-five years later - I sallied forth once more, in a Talbot Express campervan, in which I lived for two months, travelling by ferry to Spain then overland through France and back home.
This was an uncharacteristic venture. I became a father at the age of twenty-three and, although I had toured as a musician, I had never gone travelling for the sake of it. I am a domestic creature and enjoy the company of friends and family. Away from these and from the hurly burly of London, and with very limited Spanish and French, I formed new relationships: with the weather, animals, the landscape, the van - and with sound.
I sat in the sun, with the birds making merry, and played my guitar; I took refuge from the rain, wind and even snow, and played my guitar; I repaired the van, and when it was coffee time, I played. In motion, whether on foot or behind the wheel, I sang.
As in any other improvising situation I had various options: to follow, to mimic, to conjoin, to oppose, to play on in spite of the racket going on around, to rest on the ambience like a ground bass, or even not to improvise at all but to play a tune...
For this album I have selected those pieces which stand alone without imagery. The complete sequence of 21 films with music can be viewed on the accompanying dvd, if you bought the hard copy, or as a playlist on my eponymous youtube channel.
The sound for the youtube films is mixed for the lowest common denominator of laptop speakers. For this album/dvd I have remixed with full attention to the lower frequencies and without compressing out the dynamics.
I thank Richard Sanderson for giving me this opportunity to present the music as I wish it to be heard.
This second sally forth was much happier (and longer!) than the first. Whatever adventures I had hoped to encounter, in the end it was living alone with my imagination which proved the challenge, and as Sancho Panza says,

'Quien canta sus males espanta.'
He who sings frightens away his ills

He threw his guitar in a campervan and recorded himself playing wherever his wanderlust led, an often combative improviser indulging his sometimes suppressed facility for fluid folk melodies. The Spanish and French backdrops of these fecund field recordings inspire flamenco flourishes and café society chords, as Bisset battles bird and bee noise with pizzicato flurries.
Rain hisses. He offers long sonorous notes to the rising sun.

with special thanks to heddy & zehavite