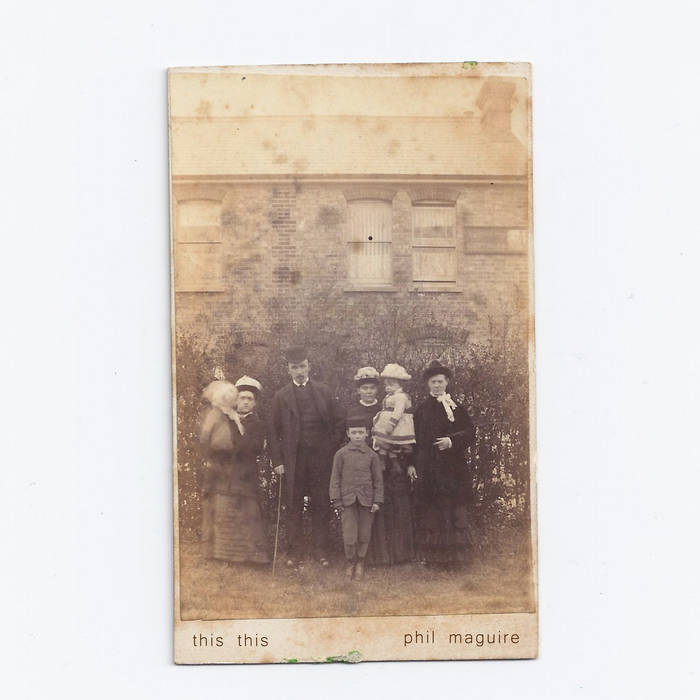 "this this" is an extraordinary collection of sounds made with a Raspberry Pi (the credit card sized bit of circuitry which is used to teach kids about coding). Maguire manages to create a world of microscopic sounds, clicks, whirrs and fields of electrical noise that are compellingly alien, and yet capture something of the excitement of those early forays into "glitch" music of the mid '90s. It's a whole new delicate beauty..

"Excellent set of minimal electronica-glitch computer music things from Phil Maguire, an English musician who has been quietly seeping out the odd cassette and Bandcamp release since 2014…this this (LINEAR OBSESSIONAL LOR 078) is one of his rare physical releases and in some ways an unusual item to find in the LOR catalogue. The album collects two “suites”, the five parts of the highly alien minimal buzz-drone of “This This”, and the even more dry, desolate and stark purrings of “th at ti me wh en”, which originally emanated in 2015 on his own This This Recordings imprint.

Maguire’s sound art is notable for originating mostly in the guts of a Raspberry Pi, which is the cheap circuit-board miniature computer that’s been creating quite a stir in the world of “digital” these days…a versatile piece of kit which even I can operate (I made mine into a media player) and features in a small range of dedicated computing magazines in the high street, full of articles suggesting DIY projects and teach-yourself-coding exercises. Maguire plays the Raspberry Pi to create wholly abstract and non-human noise, but somehow this this is not a harsh or hostile release, and it doesn’t take long at all for the listener to become acclimatised to its strange tones and start to enjoy or appreciate the textures and patterns inside this tiny world. It may feel sealed off, claustrophobic even, but it’s a good zone to visit for four or five minutes at a time.

The sleeve notes refer us back to the mid-1990s when, if you recall, “glitch” music was one of the big things in vogue. What I remember of it (and I do still enjoy the “genre”), a lot of glitch was associated with European labels and artistes, particularly in Vienna and Cologne. It may have had some lineage with Techno and dance music, and its production involved hacking into synths or (if feeling more radical) experimenting with sound files on a laptop. My verdict is that Maguire owes practically nothing to dance music, and has arrived at his extremely reduced and introverted abstractions by other means, perhaps more processed based methods. If I’m right about that, then Phil Maguire’s music might fit in on the Hideous Replica label in some ways, although I’m not sure if their aesthetic choices overlap exactly. As to the hardware and production aspects of glitch, evidently Phil Maguire has taken it further by bypassing musical instruments and keyboards altogether, and even surpassing laptop music, by working with such a compact and tiny instrument as the Raspberry Pi.

If we were going to start a cultural war of one-upmanship over this, it could be argued that Maguire’s exceptionally modest set-up makes the average laptop with its weighty OS, software bloat, and hundreds of MP3 files look like the excesses of a Rick Wakeman multi-keyboard array. Recommended…"
Ed Pinsent - The sSund Projector
www.thesoundprojector.com/2016/11/27/lightweight-distro/