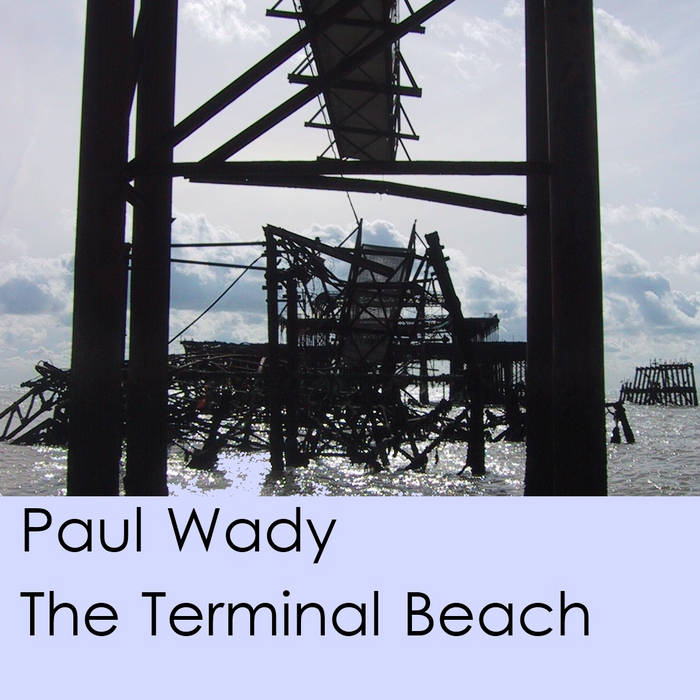 The Terminal Beach -
A Soundtrack To The JG Ballard Short Story

[Excerpts from the PDF booklet included with this release]
...It was the early 1980’s. I found a paperback in a Liverpool bookstore, one of many arranged in a row in front of the main desk, located dead centre of the shop as you entered. I had been raiding it for classic science fiction titles. Niven, Heinleinn, Clarke and Asimov of course. I had never read Ballard although I knew of him.

I was living a certain kind of life then. I’d get diagnosed with Aspergers – a snob expression for when you can look like you are not autistic – thirty years later. But then I was calmly accepting my alienated lifestyle. My constant detachment from the people who wanted to be close to me. Performing in play after play where the relationships and experiences were realer than off stage. Ballard, who had realized the post war dystopia of the western world, who lived in Shepperton, outer London with his children, his bottle and his unique experiences in Lungua airfield during WW2. What had we in common?

I made the album in 2009. I had not in any way attempted to do so before then. It had only existed as wishful thinking. An idea that would not die.

...Having grown up a bit, I wanted to use synthesizers in a way that related my feelings and experiences honestly. It is all too easy to use presets on these machines. By the time I got back to using them, synth music was a bit of a pariah. Clichés ruled the genre. Dance music had claimed certain easily recognizable factory preset voices. Arpeggiators had made things a bit too easy to get a catchy beat and tune going with very little effort or originality. Sequencers had become so sophisticated, they could play everything. Computers had started to impersonate classic machines, to the point that people no longer needed hardware at all. Just one computer with enough memory to contain all the simulations of the gear I had really loved.

So I got together a hardware collection, using a Tascam DP 02 Portastudio to record it all. A minimum of mixing, using only added delay effects. All I had was an Access Virus TI Polar, and Moog Voyager (rack) and an Alesis midiverb III effects unit. An Akai MPC 1000 sequencer was occasionally used....

....I found many ways out of this nihilistic world of the early 80’s. But it left me with a great deal to express, and for me the only way to do it was with musical instruments cold and mechanical enough to do it.

REVIEW-
Paul Wady’s The Terminal Beach (Linear Obessional), yes, based on the J.G. Ballard short story of the same name, is not only absolutely gorgeous, it harkens back to the soundtracks of 1950s’ science fiction B-movies. Wady first read Ballard’s story back in the 1980s and has always though of producing a work based on the shorty story.* It took Wady thirty plus years to do so, but it is was well worth the wait. The Terminal Beach is full-on synthesizer music, but if that is a draw back in your mind, don’t let it be. The album captures the essence of growing up in the time when the destruction of the world was a distinct and imminent possibility. Today, the humans are working famously well as destroying the planet, the ending is not as near as it once was. But back to the album at hand. I found Paul Wady’s The Terminal Beach to be an extraordinary work and cannot imagine a world that this will not be in my top ten list for 2012
-David Nemeth, Acts of Silence
www.actsofsilence.com/album-review/eniwetok-diaries/