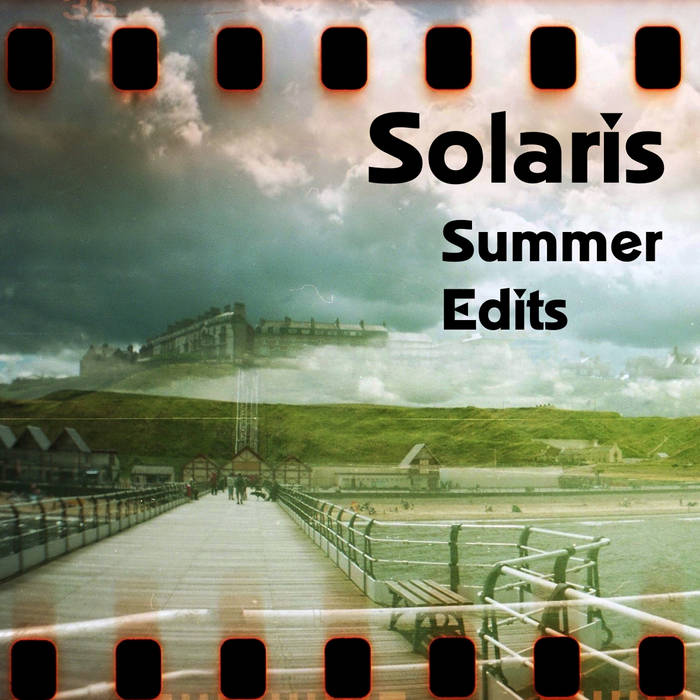 Solaris was formed by Mark Sanderson, Richard Sanderson and Mark Spybey as young krautrock fans in Teesside in 1974, when they were aged 12 and 13. As the members grew up through post-punk, electronic music and free improv they have remained friends and still occasionally record together. These sessions were produced my Mark Spybey in Northumberland in 2010 and 2012 during the Summer holidays, and although the musicians have matured in the intervening decades, the influences of those original favourites (particularly the improvisational alchemy of Can and the cut-ups and aggression of Faust) are still audible.

Linear Obsessional is delighted to present their debut album- some 42 years after forming!

Recorded by Mark Spybey 2010 and 2012 in Northumberland

Beautifully mastered by Tokee. Many thanks!

"Mark Spybey, and Richard and Mark Sanderson have constructed a curious album of wide-ranging textures. As Solaris, they exhibit an unforced experimentalism and commitment to an open-ended sound pallet which recalls This Heat or Metabolist. On “The Blasted Heath,” a series of widely spaced and muted power chords play out over a reverberating landscape of harmonica and flute. Meanwhile, “Max Meet Sonny” starts off like a backing track from Beefheart’s Ice Cream For Crow album. Yet it evolves through numerous stages, until by the end, it sounds like some lo-fi Morricone score. Other treats include the special needs jazz of “Private Pulsar” and the glitchy dub-scape of “Strides.”"
Graham Duff - Dangerous Minds
dangerousminds.net/comments/graham_duffs_epic_best_albums_of_2016_mega-post

"This whole “Krautrock thing” sometimes seems to have grown into something monstrous and uncontrollable…it’s been twenty years since I began this stupid music magazine venture, and in my first issue I was full of enthusiasm with the “rediscovery” of what was for me mostly new territory, and wittered in insane, fatuous ways about the music of Faust, Popol Vuh, Amon Düül, Neu!, and Tangerine Dream. The 19
90s were a good time to be doing that, as so much of the back catalogue of prominent Kraut idols was being reissued on compact disc, and more discoveries kept coming to light as record labels maintained the programme of intensive vault-excavations. Since then there’s been books and articles galore fixing “Krautrock” as a viable genre in our minds, and nowadays the term is applied loosely by music journalists and press agents to any contemporary combo trying anything that’s vaguely experimental. Likewise, many bands and musicians are quick to apply it to their music themselves, without any prompting. We think we understand the term as shared currency, but do we? If only we could all agree on what “Krautrock” actually means…there’s so much variety and ground-breaking material that emerged from parts of Germany through the 1970s, so much of it with very little common ground.

I mention this with no prejudice whatever towards Solaris, and their rather nifty CDR called Summer Edits (LINEAR OBESSIONAL RECORDINGS LOR 0069). The headline is that these 12 instrumentals are heavily influenced by “Krautrock”, but the band come clean about this, and the influence has come about in a rather roundabout way. Also, to their credit, they are nowhere near as smarmy and “knowing” about their references as the awful Stereloab, or Julian Cope on Skellington. Further, Solaris quickly transcend the influences, and end up creating great and original music all of their own, and the inventiveness and ingenuity on offer here is impressive, each track revealing new ideas and fresh surprises.

The team of Mark Sanderson, Mark Spybey and Richard Sanderson claim that they formed Solaris in 1974, when they were all teenagers. They shared a love of Krautrock music during these glorious years when Can LPs were selling in Woolworths and The Faust Tapes could be had for 49p from a Virgin Megastore. Solaris never made any records or cassettes, however, and the present release represents the efforts of these fifty-something English fellows as they “reformed” the band. Recordings were made in 2010 and 2012. The notes here state in a euphemistic fashion that “the musicians have matured in the intervening decades”, but I think the process that is relevant is that both Sandersons and Spybey have lived through many interesting developments and shifts in musical culture in these isles, and followed separate paths too; both Sandersons were members of a post-punk band called Drop, but Richard followed the shining star of free improvisation in the 1980s and has never looked back. I have met Richard in London a few times; I still recall him saying “I didn’t fight in the punk wars for this!” a propos of some recent musical development which he didn’t approve of. This is what I mean by “a roundabout way”; Solaris have returned to their Krautrock roots after 42 years, and filtered it through their adult selves. A process of distillation, one might say.

Music here as noted has much to savour in terms of its inventiveness, sense of discovery, even a sense of fun…music soon escapes the traps of genre pigeon-holing and becomes a living thing. Contributing factors might include (1) lo-fi recording quality in places, adding a sheen of authenticity without feeling like a spray-on atmosphere effect; (2) slightly ramshackle playing, where instruments and timing don’t quite marry up, but the rough edges make it just perfect; (3) evidence of strong rapport between the three, creating events and moments which many musicians would gaze on in envy, showing that their friendship has held good after a long time. Hugely enjoyable…gets better the more I listen. Expect scads of lively avant-rock, bizarre mystery drones, strange outer-space sounds, tasty organ licks, and more. Free experimentation influences mixing in with the project. In one instance (‘The In Section’) they even liken themselves to The Mnemonists. But there’s a lot of originality, and rarely if ever do they settle for a commonplace noise or an overused digital sound for any reason. Great!"
Ed Pinsent- The Sound Projector
www.thesoundprojector.com/2016/11/23/stasi-criteria/

"Solaris, Sanderson's first band, featured his cousin, Mark Sanderson, playing acoustic guitar with a battery as a slide and best friend Mark Spybey (later of Zoviet France) playing a single Boys' Brigade drum. They played what Sanderson recalls as "a sort of thrashing free-jazz stuff" in mid-'70s Teesside, inspired by Tangerine Dream records and a group outing to a Kraftwerk gig in Middlesbrough. In 2010 they reformed for a series of summer recording sessions at Spybey's place in Northumberland. The results, released on Linear Obsessional in 2016, sound like nothing on earth."
The Quietus
thequietus.com/articles/21180-linear-obsessional-recordings-richard-sanderson-interview