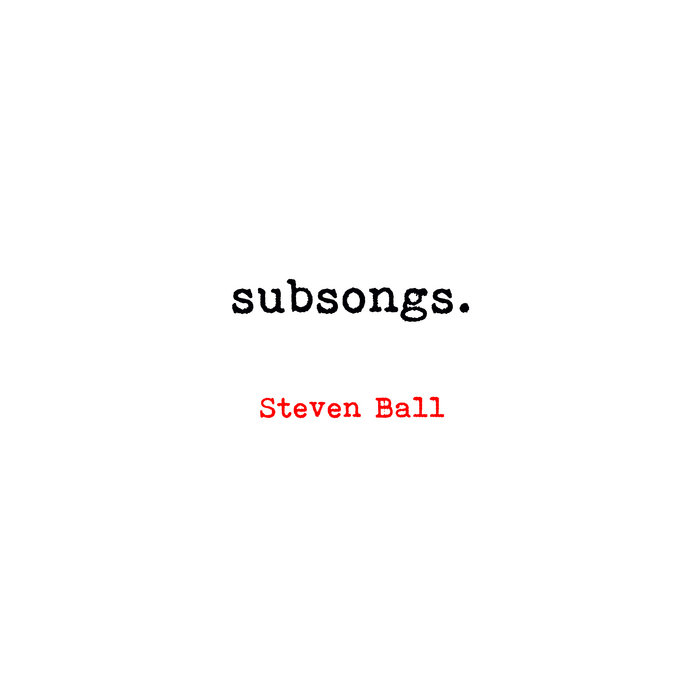 Linear Obsessional is delighted to present this new collection of nine conceptual songs by the musician and artist Steven Ball, following the success of his aclaimed "Life of Barrymore" EP. What is a song? What can you sing about? Steven's searching pieces don't neccesarily answer these, but the results are some of his most mesmerically fascinating songs yet- all sung in his distinctive croon.

"SUBSONGS is a new collection of songs written and recorded between 2016 and 2017. The lyrics are plucked from a miscellany of themes and sources, employing diverse, sometimes reflexive, often experimental approaches to writing. These are 'almost songs', never rhyming, and rarely forming a conventional structure, such melody as there is often relies upon repetition and reiteration, all set to a musical palette of guitars, software instruments, samples, and occasionally field recordings"
-Steven Ball

Written, performed and recorded by Steven Ball with the exception of-
Off the Yard (after Terry Ball) Lyric is transcribed verbatim from the poetry notebooks of Terry Ball

Subsong includes a recording of an anonymous cellist under Blackfriars Bridge,London.

Periscopic includes samples of original soundtrack music by Ernest Gold from the film "On The Beach" (Stanley Kramer, 1959)

REVIEWS
"This Mr S Ball is a long-time man. Spending decades in Storm Bugs this is the first solo album that I’m aware of and certainly his first full album for the wonderful Linear Obsessional group.

Classy from the uncluttered front cover art to the spare arrangements for instruments and voice – this is a disc as bracing as an arctic northerly blast.

This collection of real songs is unfussy and focused. Steven’s voice never raises much above a conversational hum, a sing/speak that’s both comforting and hypnotic. The very normality of his vocal approach makes this an arresting enough listen – but couple this with the barely-there arrangements and you are on to a winner.

Like the Wu-Tang on their 36 Chambers best Steven practices the secret art of sticking to one distinct, lopsided sample/loop and letting it breathe. There’s no smothering hiss on this finely recorded disc and spare bass, guitar or piano (but rarely playing at the same time) create a soft scaffold. ‘Inside’ showcases this approach wonderfully with a handful of descending bass tones capturing a whole suitcase full of moods.

An emphasis on structure and organically developing themes makes the 15 min ‘Of the Yard (after Terry Ball)’ an exercise in deeper listening and repetition. Sort of like a kitchen sink version of ‘There was an old lady that swallowed a fly’ cribbed from unpublished poetry notebooks (which the notes suggest it was).

Less esoteric matters are discussed on ‘Garage/Band’. What could be a withering snark at underground poseurs ‘pretending to be bored’ Steven delivers with a kindly wink, and avuncular sigh – we’ve all been there eh?

The missing link between reductionist improv and the intimate breathy song cycles of a Robert Wyatt."
Radio Free Midwich
radiofreemidwich.wordpress.com/2017/10/18/dense-as-blood-rfm-on-maalem-mahmoud-gania-baccamchayer-and-broken-shoulder-ij-grey-guides-and-steven-ball/

"Steven Ball continues his mission to reinvent the song form on his own terms, informed by much musical history and sparked by ideas that may have filtered through his knowledge of modern art and avant-garde film-making. When I say “reinvent”, he might also have it mind to “deconstruct” or even to “subvert” popular song. The most prominent aspect of this plan is his approach to singing, which is to create a wispy washed-out breathy ambience, removing about 99% of any human sensibility, and appearing massively detached from emotional engagement of any kind. Right away I expect many readers would be turned away by such a package, but you really need to hear Subsongs (LINEAR OBSESSIONAL RECORDINGS LOR095) before you come to your own conclusions, if any. Admittedly we too were slow to hear the sense behind Ball’s scheme, but Life Of Barrymore somehow made a connection, drilling quite deeply into a very serious topic in a conceptual piece where the emotional “coldness” of the song delivery made perfect sense, and indeed was integral part of whole. Same observations on today’s spin.

‘Inside’ combines the Bowie of Blackstar (lost, near-dead) with an emptied-out ghost of a tune, effortlessly creating the sense of deep alienation that Scott Walker can only dream of with his wasteful, over-worked projects such as The Drift. ‘Off Off On’ is almost the last word in stripped-down Cold Wave – minimal synth just got even more minimal. It’s probably the love song (or suicide note) of an android, written in binary code. ‘Subsong’ takes the archaic singer-songwriter setup (voice and guitar) and performs it in ultra-stilted fashion at a painfully slow tempo – Leonard Cohen and Neil Young rethought for the post-modern smartphone-inflected mind. The lyric here even allows itself the trick of commenting on its own construction, laying bare the mechanics of songwriting (much like Peter Gidal did with Structuralist film-making). Yet it’s also a hauntingly beautiful piece; the spare use of a forlorn field recording (busker playing in a shopping mall? Actually a cellist under Blackfriars Bridge) ought to make you cry.

‘Of The Yard (After Terry Ball)’ will cement the deal if you’ve made it this far; the longest 15 minutes in show business; suicide-inducing existential song with two minor chords; imagery suggests we’re all labouring in a prison yard on a chain gang breaking stones, a bleak vision of the human condition; Jacques Brel rethought as a schematic infogram. Lyric here comes direct from notebooks of said Terry Ball. And if that doesn’t get you busy knitting your own noose, tune into ‘Garage/Band’, a song which laments the futility and boredom of being a rock star while lashing the hypocrisy of a dole-queue band “pretending to be poor” and concluding “we were never really free” with a noted of resigned bitterness. Phew. Personally I hope this isn’t a direct dig at Storm Bugs, the 1980s post-punk duo of which Ball was (and still is) one half, but the profound disillusionment behind this song will be recognisable to any listener over 40 years of age who surveys the current music landscape and wonders what became of all the radical ideas and promising futures which the pages of the NME promised us circa 1982.

All the above indicates to me that the time is right for a complete remake of the entire Ziggy Stardust LP, written from the point of view of Mick Ronson after he’d been abandoned by his boss. Ball would be just the man for the job. It would make a perfect companion piece to Through A Telephone Box Darkly (a.k.a. Suicide Suite, the 2001 CDR by Philip Sanderson."
-Ed Pinsent, the Sound Projector
www.thesoundprojector.com/2018/06/02/underground-map