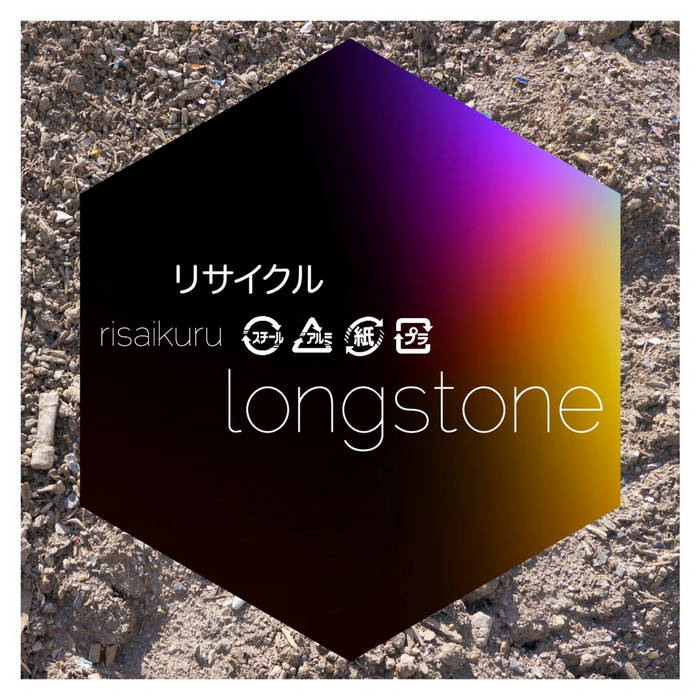 Linear Obsessional is very excited to release an astonishing new album from the improv/electronic group Longstone.

1. ( Onagawa ) soil created from recycled tsunami rubble being used to help reconstruct the town.
2. ( Enoshima ) a tsunami tideline of scattered objects high up on the central hill of a tiny inhabited island .

For Longstone's risaikuru project, each member of the group viewed and musically interpreted the included photographs independently.
The resulting recordings, along with original location recordings taken from Onagawa and Enoshima, were then collected together
and themselves recycled into a cohesive composition.

For this project Longstone are:

"Risaikuru" reached number 27 in Louder Than War's Albums of the Year 2014-
louderthanwar.com/louder-than-war-writerstop-twenty-albums-of-the-year-highly-recommended/

"リサイクル risaikuru is Linear Obsessional’s first vinyl release, an elaborate package that includes two photos and copious liner notes. It’s the best release the label has ever offered (out of 56 releases), and due to its subject matter, it’s an important one as well.

The typical news cycle is incredibly brief, no matter the magnitude of the situation. Some stories are kept alive longer than they deserve (for example, celebrity crime), but others fall by the wayside as soon as their apparent immediacy has ended. The 2011 earthquake, tsunami and nuclear meltdowns took 16,000 lives, caused $235 billion in damage, and fell swiftly from the public’s eye. So, Japan’s fine now, right? No – but the nation is recovering, and the residents remain hopeful.

2008’s Kabuki was Longstone‘s first expression of love for Japanese culture. Three years later, Sakura was a direct reaction to the disaster, with proceeds donated to a local charity. The band – typically Mike Cross and Mike Ward with a handful of friends – has now completed an “accidental trilogy”.

Over the past sixteen years, Longstone has remained consistently avant-garde, using everything from found objects to Speak and Spell in its performances. This has kept them fresh and uncategorizable. Previous works have been dotted with drone, sampled dialogue, and even dancefloor glitch. risaikuru means recycle, and fits the approach. Ward toured the affected provinces and snapped some photographs, two of which became the inspiration for this project. On their own, these photos are unremarkable, seeming simply to portray dirt. But delve deeper, and one learns that these are images of the rubble line and of the soil that is being used in the recovery process. Each member of the band then recorded their own musical reaction to the photos, and their individual contributions were melded with local field recordings to form this panoramic pair of pieces, subtitled “Onagawa” and “Enoshima”. The otherworldly nature of the recording is a direct result of the sound sources and the composition process.

Are we defined by disaster, or by our reaction to disaster? Art generated through tragedy leads one to believe the latter. Longstone uses recycled guitar boxes, “junk percussion” and previously recorded Black Tailed Gulls to mirror the work of the recovery process: salvage what is still usable, and stitch it together. While listening to the album, one can imagine those tiny discoveries – a tea cup, a child’s toy, and of course, a photograph – becoming part of artistic endeavors, while a plank, a carton and a hammer are used in physical endeavors. One of the most moving stories to come from post-tsunami Japan is that of thousands of wallets being returned to the families of the owners, money intact: an incredible show of respect that may not be limited to Japanese culture, but that surely defines it.

The tsunami itself is suggested by the atonal chords that silence the gulls near the beginning of the opening track and are echoed a few minutes into Side B. After this, a quieter period, marked first by ominous, extended tones and later by tentative percussion. While the percussive noises intimate the sounds of recovery, the Sho chord woodwind and bells intimate something deeper: the recovery of music, and along with it, hope. Add the tempos that emerge at various times, culminating in a final electronic segment on Side B, and one begins to view the disaster through a different lens. The world may have forgotten that Japanese recovery efforts are still going on; but it has also missed out on the indomitable spirit of the survivors, who have managed to stay positive in the wake of physical and emotional devastation.

Authentic, heartfelt and wondrous, risaikuru is one of 2014’s essential releases. We recommend the physical edition, as it provides the full scope of the project, along with additional reading material. "
Richard Allen - A Closer Listen
acloserlisten.com/2014/10/16/longstone-%E3%83%AA%E3%82%B5%E3%82%A4%E3%82%AF%E3%83%AB-risaikuru/

"Reduce, reuse, recycle. Take things that have been reduced to wreckage, rubble, debris and reuse them, recycle them into new forms. New homes from old rubble. New music from old sounds. Create a new future from the debris of the past.

In March 2011, a huge earthquake shook Japan’s northern coast, triggering a tsunami, which flooded 217 square miles of the country, overwhelming towns and cities along the coast and causing a meltdown at the Fukushima Daiichi nuclear reactor. In all, more than 18,000 people were killed in the disaster in Japan. Most died by drowning.

When Mike Ward heard saw the devastation caused by the Tsunami on TV, he knew he had to do something. His band, Longstone – who had already released a Japanese-themed record, Kabuki, back in 2009 – put together the album Sakura, with all proceeds going to a charity based in the town of Onagawa.
In 2013, Mike visited Onagawa. Struck by the heroic efforts of local communities to rebuild their lives and towns, the idea for what would become Risaikuru, the third album in an accidental Japanese trilogy, was born.

That idea was to “combine photography with music to highlight the themes of reconstruction, recovery, recycling and positivity that were found in and around Onagawa.”

Having returned to England, Ward and Longstone’s co-founder Mike Cross gathered together a bunch of collaborators and invited them to use Ward’s photos from his trip as points of departure for musical reflections and improvisations.

These became Risaikuru, which is out now in a lovely limited vinyl run from Linear Obsessional records.

There are contributions from Chris Cundy, who uses soprano saxophones and reed organs to mimic the sounds and range of the Sho, the Japanese bamboo flute. Kev Fox plays two guitars built from old cigar boxes. Stuart Wilding squeezes dissonant and percussive sounds from an old piano frame, its strings adorned with all sorts of recovered or disused objects. Mike Ward added location recordings from Onagawa and Mike Cross worked with him to put everything together.

The result is two beautiful long-form pieces that combine ambient music with modern composition, improvisation and clanking rhythmic grooves in a rich and evocative brew. The pieces – named after Onagawa and the nearby island of Enoshima – have an effortless flow, moving through their different styles and moods seamlessly. Melodic, percussive and dissonant elements are integrated harmoniously by a worldview that embraces both darkness and light as constituent parts of one another.

At the start of Onagawa, for example, rusty scrapings and harsh crashes are punctuated by eerie whistling sounds. A slowly unfurling drone sets up a claustrophobic, unsettling vibe. Metallic clanks and atonal plunks seem wrecked, desolate.

Then, out of nowhere, the fearful mood turns carnevalesque as a disembodied electronic groove burbles and crashes. It’s like a robot junkyard jam band playing a tribute to Jean Michel Jarre’s Oxygene. It’s a fantastic, euphoric thing, with spidery cigar-box chords vying with electronic chirrups and squelches as the percussion fizzes and bumps, even more beguiling for having given us the old switcheroo from the doom and gloom preceding it.
“Please enjoy the text, music and photographs together”, says the rather wonderful PDF booklet, which accompanies Risaikuru. The booklet collects the two photographs used as inspiration by the musicians taking part, as well as several more, and thoughts and reflections from the extended Longstone crew about both their own musical contributions and the project in general.

It’s perhaps rare for music of this genre to have such an openly mimetic purpose. But, although the music works perfectly well without it, the whole package makes for a fascinating experience. The ominous bumps and crashes of Onagawa, for example, take on a different hue when accompanied by a description of the temporary plant that is recycling all of the rubble from the destroyed town. “The debris is sorted, graded, churned and mixed,” it says. “The rhythmic sound of machinery combines with the constant hum of earth movers and trucks, providing the soundtrack of daylight hours.”

Even more effective is the text relating to the gorgeous ambient swirl of Enoshima, perfectly matched to the repeating synths, guitars and field recordings that make up the piece.

“Only a few households have remained or returned since the disaster. Yet there is a flurry of activity on the jetty as the ferry disembarks. Local people, mostly pensioners, are busy cleaning and processing today’s seaweed harvest by hand, a wonderful and colourful display of traditional industry. But this is real life and not a museum or tourist attraction. Other than the hum of the boat, the shuffle of the workers and the random interjection of seagulls, the island seems still and silent.”
There is drama here too, the track’s calm surface disrupted by dissonant chord clusters around three and half minutes in, reminders of the grim destruction that preceded all of this rebuilding work. Yet it is also filled with positive energy, its glassy marimba-style motifs, rubbery bassline and pattering percussion giving it a wonderfully airy feel. It’s like the good-natured sister of In A Silent Way-era Miles Davis. Calm and unhurried, it seems to be locking into some eternal cycle of ebb and flow, death and rebirth, chaos and harmony.

Risaikuru is a wonderful record, and a fine tribute to the indestructible spirit of the people of Onagawa and Enoshima. Its mood is matched perfectly by the compositional aesthetic, and the sound world it creates is engrossing and unique. Stuart Wilding, talking about the wrecked percussion and piano frame he used for this recording, says it best of all:

“Just like the photographs they are full of details, bits and pieces of residual experiences, traces becoming reminders, being reused, to reconstruct an emerging future.”
-Paul Margree, We Need No Swords
weneednoswords.wordpress.com/2014/11/01/longstone-risaikuru/

"The title of this new release by the UK electronic group Longstone is Japanese for “recycling.” Recycling here carries many different meanings. First is the impetus behind the recording—the recycling and reconstruction taking place in Japan’s Miyagi prefecture in the wake of the highly destructive tsunami that hit there in 2011. In 2013 Longstone’s Mike Ward visited Onagawa and Enoshima in Miyagi prefecture, taking photographs of post-tsunami rebuilding and making field recordings. Two of these photographs, one from each of the towns Ward visited, served as the inspiration for the two long tracks named for them.

Recycling—of instrumental and sound materials—is at the heart of the resulting music. The instruments include junk percussion, cigar boxes repurposed as guitars, and a (salvaged?) piano frame. Ward’s field recordings are reused as musical elements, while other sounds are recycled through electronic processing. Both Enoshima and Onagawa feature heterogeneous sounds in contrasting relationships, but in both tracks chord progressions or recurring musical motifs provide the continuity and underlying structure that keep them coherent. Onagawa is additionally structured through regular rhythms."
-Daniel Barbieri, Avant Music News
avantmusicnews.com/2014/11/03/amn-reviews-longstone-risaikaru-linear-obsessional-lor056/