Right (H​)​ear Side by Side 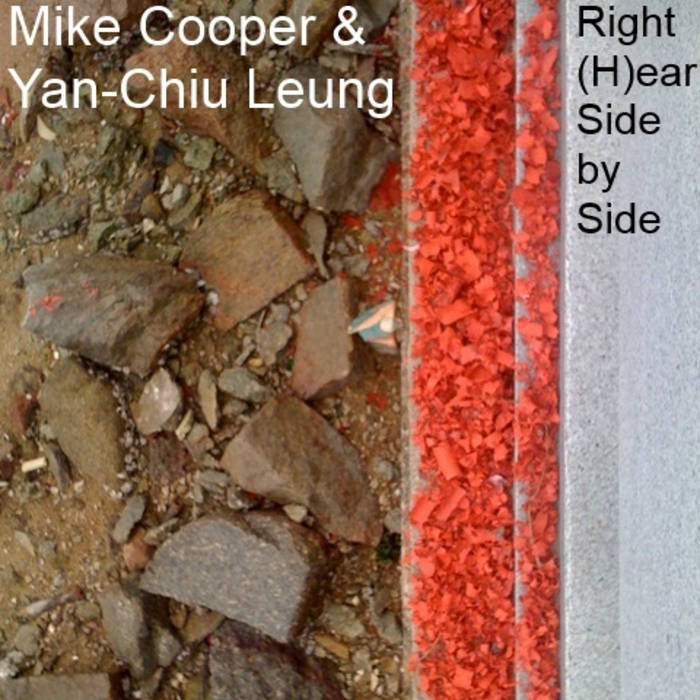 "We had never met each other before this concert. We had exchanged a few mp3s to give each other an idea of what musical oceans we both float in and then attempted to navigate our way together by free improvisation toward some distant shore. I think we arrived at a beautiful island together finally. We hope you enjoy it as much as we did. Many special thanx to Yang Yeung, Alice Wong, Yuk Mui Law, Edwin Lo and to everyone who came on the Lamma Island soundwalk"
-Mike Cooper July 2013

Recorded January 26th at Youth Square Dance Studio by Anthony Yeung as part of the Around Sound Art Festival 2013 organized by Soundpocket.

REVIEWS
"Astonishing guitar work from Mike Cooper on Right (H)ear Side by Side (LINEAR OBSESSIONAL RECORDINGS LOR043), and we should expect no less from this English veteran prodigy of guitar manipulation who has played on a large number of records from the early 1970s onwards, not all of them “free improvisation” even, yet is rarely mentioned in same breath as Derek Bailey. He’s joined by Yan-Chiu Leung on the sheng and the music was recorded at a 2013 festival in Hong Kong. On ‘Hong Kong 1’ Cooper plays a variety of styles – atonal free improvisation into blues-based riffing and out again – before settling into an eerie textured drone with throbbing pulsations as if trying to recreate a slew of Tangerine Dream LPs with a single set-up, which includes a resophonic guitar, a sampler, a delay pedal, a fuzz box and something called the Kaos Pad. Further blues mannerisms surface on ‘Hong Kong 3’ along with a distressed harmonica, in a minimalist oriental-style portrait of bleakness where the bittersweet interplay with Leung’s sheng is enough to give a grown man a shivering fit. If that doesn’t satisfy you, the sheer inscrutable bizarreness of ‘Hong Kong 4’ will have you finishing your imported beer, asking the waiter to bring you your bill…and a straitjacket. What dissonant eruptions, what metorasured yet devastating manipulation of the strings into the X-dimension. An unassuming CDR which contains wild music fit to rank with any of Fred Frith’s 1980s noisier works."
Ed Pinsent - The Sound Projector
www.thesoundprojector.com/2014/07/19/analogue-karma/

"Right (H)ear Side by Side pairs Mike Cooper’s guitar, electronics and effects with Yan-Chiu Leung’s sheng, a Chinese reed instrument. The recording, which was made in January 2013 as part of the Around Sound Art Festival in Hong Kong, represents the first face-to-face meeting of the two musicians. The result of their collaboration is a fusion of sounds and styles that navigates a vast territory of varied features.

The first and longest piece provides a good epitome of the richness of texture and density that Cooper and Leung typically create. Beginning as a mosaic of discrete moments that gradually converge into a more narrative flow, Hong Kong 1 has Cooper’s guitar producing sparse, zither-like sounds, complete with percussive strikes and detuning to approximate the string bending of traditional Chinese string music. Sustained sound is had from the sheng, its chords held during the silences between guitar activities. As the piece progresses the sound becomes denser and more active, encompassing backwards loops, drones, and a kind of two-chord progression at the end, over which Cooper plays a nearly conventional guitar solo. Hong Kong 3 is a kind of essay on breath and its sonic repercussions, whether mediated through the sheng and Cooper’s harmonica, or in the vocal-like interjections of the guitar and the actual voice that makes an appearance as the piece moves toward its conclusion. In contrast to the elemental feel of Hong Kong 3, Hong Kong 2 and Hong Kong 4 are shaped primarily by electronics and effects"
Daniel Barbiero- Avant Music News
avantmusicnews.com/2014/03/03/amn-reviews-mike-cooper-yan-chiu-leung-right-hear-side-by-side/