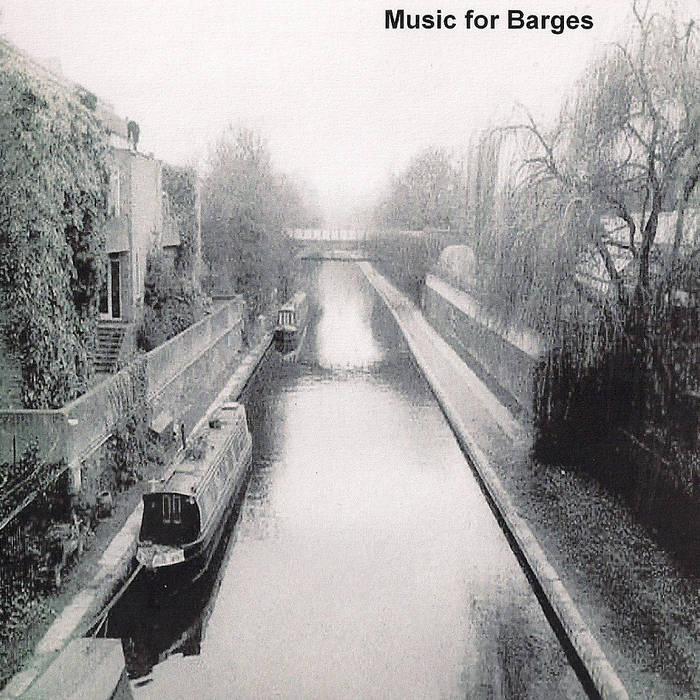 Deluxe re-issue of this 2003 classic originally given away as CDrs left on barges, later issued as a cassette on S.O.U.L tapes. This version includes three early demo versions, sleevenotes by Steve Bynghall, and full credits.

With “Music for Barges” we were trying to capture the mood of childhood holidays to Cornwall when it always rained, sea shanties, accordions, Morris Dancers and the Captain Pugwash theme music. We wanted to evoke the spirit of the thick woolly jumpers and lentil broths of the bohemian inhabitants of the barges who used to live near Camden Lock in the seventies, before it became the horror show that it is today. We wanted to see if we could capture the Victorian eeriness of Bagpuss, and its real-life counterpart, the Kristin Baybars toy shop that was always seem to be closed which was opposite our Primary School We wanted to get a whiff of Celticness and perhaps a taste of the Wicker Man soundtrack. But most of all we wanted to do something that completely in denial of the mew responsibilities we faced in the early noughties. Personally it was a time of great change for the Original Beekeepers, and perhaps we made “Music for Barges” to try and remind us of slightly less demanding times. “Take your time… to enjoy the scenery” as we sang on one song…

The first edition of the album came out on a grubby CDR in 2003. It has parts 1, 3 and 4 on it. There were no credits at all on it apart from some pictures of canals and barges and an email address – musicforbarges@hotmail.com. We went up to Oxford and went down to Camden and distributed copies along the towpath and left them on the tops of barges. I swear I remember dropping one down from a bridge on to a passing barge. Later Ashley went on a barge holiday with his family and gave more out. Of course nobody ever emailed us.

We got to know the lovely people at Victory Garden records. They had a cassette label called S.O.U.L. – Sides of Unequal Length. We added an extra part (Part 2) to make the sides more equal in length. They put it out on Cassette with the lovely yellow cover design, which I’ve always thought was beautiful. It seemed fitting that it went out on a dying format like cassette. We got a few plays here and there and did a session on Resonance FM on Richard’s show, where we played a version of the Rentaghost theme music. I think it would have fitted quite well on the album. You can hear Richard’s voice at the beginning of Part 2 from that radio show, so somehow fitting that Richard’s new label Linear Obsessional are now making it available again.

A quick note on the music. We had lots of unfinished pieces of music hanging around – and that’s how we made Music for Barges. Some of them date from the previous millennium .We also had some stuff we found on a bag of used cassettes bought from a charity shop.

We edited things together and made lots of trial audio collages. Three of these demos (the ones which are the most different from the final version) are included here. Part A includes the original version of “It will all come out in the wash” which was included on our “Bee Sting Ballads” album. It’s pretty obvious why the two barge-themed out-takes “Little Venice” and “The British Waterways Board” on Part B are out-takes, so please do be kind to them. And also don’t grumble about our rubbish edits, dodgy sound quality and mistakes. It’s all part of the unbearable shiteness of Beekeeping.

Get in touch with the Original Beekeepers via originalbeekeepers (at) yahoo.co.uk OR visit them on Facebook at www.facebook.com/pages/Shammy-Leather-Original-Beekeepers/94363324351