by Tasos Stamou and Adrian Northover 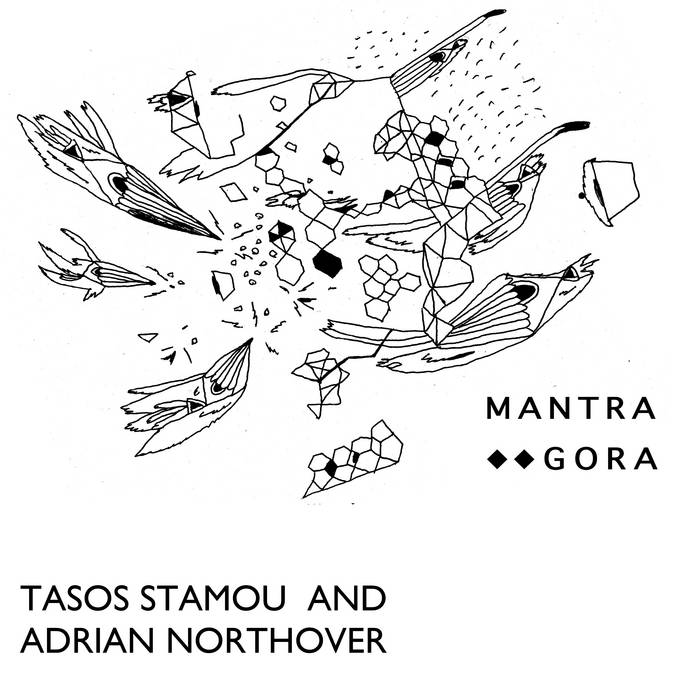 In the second in a series of duo releases, Linear Obsessional brings together Greek improvisor and circuit bender Tasos Stamou with UK free saxophonist Adrian Northover for a series of short interactions. Playful and sometimes startling these pieces run through a surprising series of atmospheres and moods, from modal drone explorations, to far-out collisions of brittle electronics and circular breathing crescendos.

Physical edition assembled by Richard and May Sanderson.

REVIEWS
"‘Mantra Gora’ is the second in Linear Obsessional’s series of duo improvisations and this time around features Tasos Stamou (prepared zither, cassette loops, digital horn, test generator) and Adrian Northover (alto and soprano saxophones). The sound is spectral and oddly peripheral, like something not fully graspable, music as fleeting corner-of-the-ear sense impression. Full of sax squeak and hum, sci-fi bloop, tape gunk, and unidentifiable rattle and klang; stalking the edges, never fully darting in any particular direction, happy to perpetually chase its own shimmering multi-dimensional tail. ‘Mantra Gora’ gathers its music from a wind-blown piling of detail, an accumulation of sound-mass from a subtle interlacing of breath and thin slivers of fuzzed metallic noise and static-drenched bleeping. Stamou and Northover, across these seven close and concise explorations, prod and entice their instruments into bonds of unlikely beauty and fertile weirdness, a rolling union of delicate hissing furred elements and soft singing feathers"
-Michael Holland, Ears For Eyes
ears4eyes.blogspot.co.uk/2014/07/tasos-stamou-and-adrian-northover.html

"An album of short-ish duets, with Adrian Northover on saxophone and Tasos Stamou handling all sorts of electronic and mechanical gubbins (‘prepared zither, cassette loops, digital horn and test generator’ it says on the pleasingly chunky retro evidence case that holds the physical release.)

I wasn’t familiar with Stamou previously, although the internet tells me that works with all sorts of instruments and devices, both acoustic and electronic, and has an impressive CV. Silly me for being so ignorant. Sorry Tasos.

It’s an inspiring pairing, anyway, resulting in a recording that is sparse and dry yet incredibly aurally rich, the duo’s pieces opening up an exciting sound world. Listen to The String Theorists, for example, to hear Stamou’s Radiophonic Workshop-style splurges oozing out of the speakers as Northover’s soprano hoots and twitters around it in a thrillingly absurd dance.

Often this seems to be music made a microscopic level. The clicks and breaths of Northover’s sax as they meld with Tasos’ low feedback tones, springy clicks and resonant metallic zither clangs make for a collage that’s minute and detailed, yet utterly riveting. For his part, Tasos’s interventions are either glisteningly elegant, an Alexander Calder mobile floating enigmatically in the air, or bracingly alien, as on his machine music blasts in Lullaby For The Existentialists.

Occasionally the synergy between the two players is so great that their sounds meld and you can’t tell which is which. On Periwinkle Supreme, what seems at first to be a smooth sax note warps and wahs, revealing it to be some kind of loop as Northover’s sax gently descends like a vapour. In these instances it is like listening to a single organic being.

Elsewhere, as on the album’s title track, two players also mirror each other, matching rhythms or sequences of notes using very different apparatus. Here Northover works up into full circular breathing mode, his initial hollow breaths giving way first to dissonant shards and then into stormy cascades of notes.

Stamou matches him every step of the way. First, he deploys a series of clangy strikes that resemble a birdcage being whacked with a drumstick. Then, as Northover really gets going, Stamou lets rip with a series of bubbly electronic bleeps. Somehow these two cascades of sound lock together in the vortex, like a fast-running river, rocks and pebbles swirling around the flow as it rushes toward the sea.
Paul Margree - We Need No Swords
weneednoswords.wordpress.com/2014/07/19/tasos-stamou-and-adrian-northover-mantra-gora/