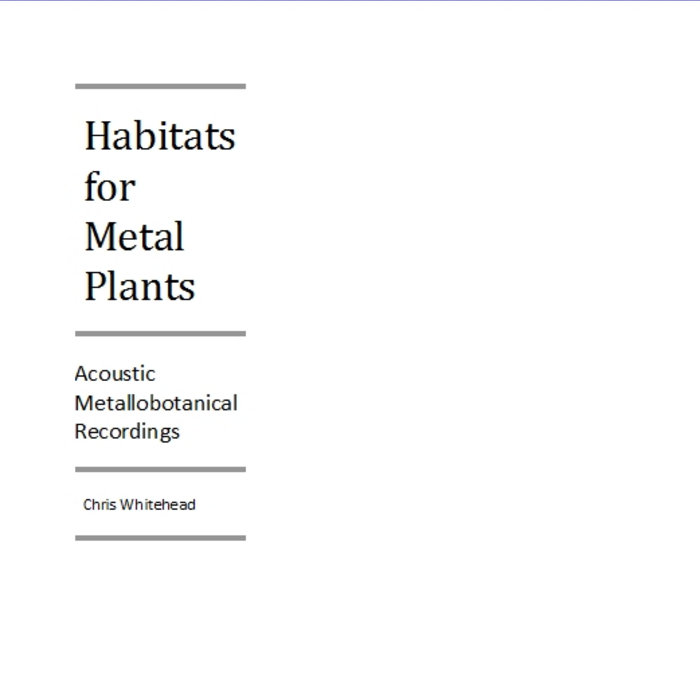 Linear Obsessional is delighted to present this new release fromChris Whitehead - A CD of sounds to be played to metal plants, with an accompanying detailed PDF guide...

This CD was released simultaneously with Mark Browne's "The Prejudices of History" - with which it shares some concerns.

"Since the Industrial Revolution the soil in Britain has changed considerably in its formulation. Where once it almost exclusively consisted of organic matter, it is now likely to hold high levels of metallic elements such as iron, aluminium and copper. Areas where industrial processes took place in the past but have since been reclaimed by nature are particularly rich in this residual metal content.

Plants growing in these environments have, by means of Darwinian natural selection coupled with sheer determination to survive, managed to incorporate various metals into their very DNA. The resulting species display a variety of features only made possible at the point where biology and metallurgy combine.

The aim of this guide is to assist the amateur metallobotanist in identifying these enigmatic plants, and also to instil enthusiasm into those armchair readers who have never searched the disused foundries of Sheffield for a reclusive Cutleri silvaservicia or listened attentively on the hills of West Yorkshire for the soothing sound of a clump of Alpine Cog Daisies (Coggi interlockia) gently turning in the breeze.

The two sound recordings included here have been developed to aid the growth of these unusual plants. By placing a speaker at either side of the specimen (ideally they should be equidistant and each no closer than two feet away) the sound produced will acoustically recreate a very favourable growing environment. Once brought indoors and planted in any kind of container what these organisms miss most are sound vibrations of a metallic nature.

By regularly subjecting your plants to these carefully composed and scientifically tested sounds (about twice a week is the recommended frequency) you should begin to see them flourish and possibly even bear fruit. Of course not all varieties are suitable to collect. Some are protected by law and others are just too bad tempered, quite frankly"

-Chris Whitehead, from the introduction to the booklet "Flora Metallicum Britannica- a field guide to the metallic plants of the Britsh Isles" (included with this download)

Recorded by Chris Whitehead.
Mastered in Whitby by Chris Corner.
Thanks to Richard Sanderson and Mark Browne.

"In the run-up to the London 2012 Olympics, I worked for a while in the construction industry. During that time, I was lucky enough to talk to people who had overseen the creation of the 256-hectare Olympic Park.

I soon became fascinated by the early stages of the project – the dirty, back breaking work of making a crumbling and polluted site, previously home to chemical works, food processing facilities, concrete plants, bus stations and railway sidings that had to take place before any building work could start.

The problem, they told me, was that 200 years of industrial activity had filled the site’s soil with all sorts of gunk. Chemicals, minerals, debris – all sorts of crap. ‘Contaminated land’ was the industry term for this, and it needed to be decontaminated – or ‘remediated’ – before anything else could be built on it. In all, the remediation teams excavated and treated more than two million cubic metres of soil in three years, much of it through three ‘soil hospitals’ on the site.

Nice clean soil is what we all want, right? Well, sound artist and musician Chris Whitehead might disagree. His latest work, ‘Habitats for Metal Plants’ released on the fine Linear Obsessional net label, is a thought experiment around the ecological consequences when industrial land isn’t cleaned up.

“Plants growing in these environments have, by means of Darwinian natural selection coupled with sheer determination to survive, managed to incorporate various metals into their very DNA”, he says in the booklet accompanying his release. “The resulting species display a variety of features only made possible at the point where biology and metallurgy combine.”

This strange, whimsical and yet also haunting records is, Whitehead explains, designed to be played to such plants to help them flourish. It’s a joke, obviously, and a pretty good one at that – check out the illustrations and examples of metallic plant species that Whitehead has put together for in his release notes, as well as the lovely artwork on his website – to see what I mean.

These tall tales enables the record to shed light on some of Whitehead’s abiding concerns – the fragility of ecosystems, the environmental pressure placed on landscapes almost everywhere you look – in a slightly less apocalyptic way than in ‘South Gare’, his previous album for Linear Obsessional.

Like ‘South Gare’, the new pieces combines recordings with a variety of manipulations and sound making activities to produce echoing, abrasive soundscapes. The first piece, ‘Abandoned Magnesium Works, Hartlepool’ starts with a ghostly, metallic ringing, soon complemented by a high-pitched yowling and metallic scraping. As it continues, the whines fade, replaced by an electric scrabbling and scraping, as if something is trying to get out.

Finally, there’s a repeated banging of metal on metal, harsh, insistent, pounding – like a machine that’s still working, still doing its job long after everything else has been shut down, the lucrative contracts long gone, the workforce let go, production moved somewhere else with lower labour costs and easier corners to cut.

The sounds of these pieces work together with their titles to summon up an odd sense of wonder and nostalgia at these contemporary ruins, like Paul Virilio marvelling at the wreckage of Nazi sea defences.

This sense of ‘Ruin Lust’ is heightened in the second piece, ‘Derelict Ball Bearing Factory, Sheffield’. This is a denser, busier piece, buzzes, whirrs and abrasive sounds coming in and out of focus during its 11 minutes. At certain times during the piece, we hear snatches of field recording which poignantly evoke times when the building was in use. Halfway through, minimal violin drones start up, adding a bare kind of melody to the scraping and clanging.

This is a strangely affirming record, the desolate and melancholy textures balanced by the unexpected moments of melody and whimsy (the Jews’ Harp in the strange, short piece that ends the record, the descriptions and drawings of the fictional metallic plants created so lovingly by Whitehead in his release booklet). Whitehead seems to see the future - a strange hybrid ecology – as well as the past in the shattered locations he evokes, giving us a sense that the land will endure despite the havoc wreaked upon it."
-Paul Margree, We Need No Swords
weneednoswords.wordpress.com/2014/03/08/chris-whitehead-habitats-for-metal-plants/

‘Habitats for metal plants’ is a release based the humorous existence of metallic plants in Great Britain.

From the liner notes

‘Plants growing in these environments have, by means of Darwinian natural selection coupled with sheer determination to survive, managed to incorporate various metals into their very DNA. The resulting species display a variety of features only made possible at the point where biology and metallurgy combine.’

This piece presents a metallic quality reminiscent of previous Whitehead works. The clanking, rattling and droning sounds lead the listener to a somber path where scale and resonance acquire gigantic proportions. By minute 5′ the piece enters a new stance where the sense of of scale varies drastically. On minute 5′ a series of harsh and noisy textures emerge establishing a microscopic and detailed perception of things. By minute 7′ the large scaled metallic sound return. In addition the sounds of voices and construction machines join the composition creating a horizon where ‘reality’ and illusion blend.

Although the premise of the release is humorous the pieces present a serious and deep listening experience with the exception of piece number three, ‘Trainsition’, which by combining a mouth harp and recordings from a social gathering, achieves some sort of ‘funny’ sonority.

The second piece seems to be less about matter and more about electronics, here we can perceive sounds produced by static and distortion, By minute 2′ a tonal sonority emerges like an emotional aura that takes over and then fades away. By minute 3′ the pieces changes drastically as they enter sounds produced by human voices and what seems like human activity -dragging, throwing-. By minute 5′ we can listen to more ‘musical sounds’ and specifically a drone that sets the mood for the piece. Later we get to listen to something that sounds like a violin mixed with drones and, again, human voices. This model continues and develop until minute 10:30 where some deaf and repetitive sounds arise to just disappear in a similar way than the engine of a car strops running.

The combination of a mouth harp and voices in this piece has a funny thing to it that makes sense with the whole premise of the work.

As someone who writes reviews of sound art and experimental music I am often exposed to new releases all the time. Releases submitted by new labels, through new means of distribution and by new artists presenting new new approaches… I think that the listener often has the sensibility and time to only focus on a few works and artists, and still he will recognize certain elements and approaches that will interest him more than others within the same body of work or even within the same piece.

I have been following the work of Chris Whithead for some time and when you sum his releases, as a listener, you can clearly perceive a formal direction, you tell the kind of formal questions that he is making. But here in particular one can perceive new approaches and questions. Through many points I noticed a greater emphasis on the isolation of certain individual sounds. I recognized too a very rewarding interest in melodic and harmonic patterns and in more musical sonorities in general . I could also tell a more experimental approach to the medium showing a developing interest in noise and distortion.

Subjectively speaking ‘Habitats for metal plants’ stands out because a very fortunate ‘cinematic’ narrative sense that I found on it and that I highly welcome. The sonorities and structure make me feel in front of a movie and more specifically in front of an avant garde film that presents a series of very odd and bizarre actions and images randomly linked and using a highly encoded and hidden symbolism full of appeal and meaning."
David Vélez - The Field Reporter
thefieldreporter.wordpress.com/2014/06/30/382/