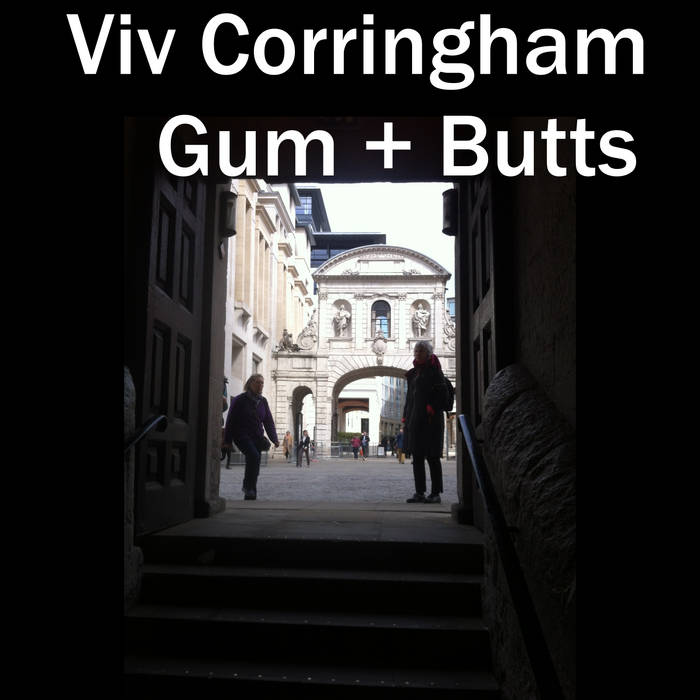 Linear Obsessional is delighted to present a new solo album by the British vocalist Viv Corringham. On "Gum and Butts" Viv returns to London (she's now based in New York) and records in 6 unique sonic spaces, responding and reacting to the environment in real time. The result is a spellbinding mix of evocative field recordings and dazzling, "extended technique" vocalising. .

Notes-
This is a collection of live vocal improvisations with the city. They combine three activities I enjoy: wandering around London, listening to city sounds, and improvised singing. To make one of these works, I simply start to walk and record.

In 2002 some recordings I had made in this way were broadcast on London’s Resonance fm radio as a weekly series called Vocal Strolls. Richard Sanderson was splendidly enthusiastic about them at the time and has invited me to create a new collection for this album.

These works were all made on a visit from my new home in USA back to London in March and September 2013. It has been a great (and slightly nostalgic) pleasure to re-tread old walks and also to find new ones.
-Viv Corringham

"Like a thief trying to leave no fingerprints, traditionally field recordists remain outside their own work. They breathe quietly, move stealthily and sit motionless beside microphones in forests as if they wish they were not there at all. As if they long to somehow capture this music of the environment without invading it in any way, because to be a figure in a landscape is to change the landscape.

A different approach is taken by Viv Corringham, for whom participation in the environment as she moves through it forms the core of the six tracks on Gum and Butts. Viv describes the disc as a collection of live vocal improvisations with the city. In her own words: ’They combine three activities I enjoy: Wandering around London, listening to city sounds, and improvised singing. To make one of these works, I simply start to walk and record. I think of the sound environment as an equal partner, like a fellow improviser at a gig. I try to avoid using it as an “interesting backdrop” for my vocals. I play a bit, it plays a bit and we play together.’

The recordings are made in real time using binaural microphones. As might be expected of someone who is a certified teacher of Deep Listening and has spent time studying with Pauline Oliveros, Viv’s interpretations draw from the core and plumb the depths of each fleeting sound moment. Of course she starts with surfaces, but as the tracks progress elements within the melee are drawn out and illuminated. I see it as a learning experience for the artist and the listener, because contouring and interlacing the human voice intricately within an unpredictable cityscape requires an ever deeper attention to detail.

For the listener accustomed to the soundworld being left to unfold by itself and the anonymity, or even attempted non-existence of the artist, to have a woman suddenly respond to a whirring fan or a machine on a construction site by improvising a vocal around it can seem unsettling. It is exactly these original techniques that require us to recalibrate our focus and rethink ourselves out of ruts.

FR: Viv, you let the environment speak for itself a lot of the time, listening.

VC: Yes that sense of listening is really important to me.

FR: Do you wear binaural mics in your ears?

VC: They are technically pseudo-binaurals as they don’t go in my ear but above. So they look like earbuds, sort of. The advantage with pseudos is they sound ok in speakers, not only headphones

FR: Do you perform live often, and is it usually improvised?

VC: I do as often as possible. Yes, usually improvised, though I had a duo with Peter Cusack doing songs, mainly Mediterranean. In London I have a duo with Alison Blunt and a trio with Charles Hayward and Nick Doyne Ditmas called Monkey Puzzle Trio. I also do solos and ad hoc groups in New York and anywhere else I can.

Now living in North America, Viv returned to London and visited six diverse locations where she recorded Gum and Butts. These are certainly not recordings of performances though , they’re far more intimate than that. As she points out, walking round a city talking and singing apparently to yourself is nowhere near as embarrassing as it used to be. These days everyone is speaking into mobile phones, often quite loudly. It sometimes seems the only way modern man apprehends the outside world is through one of these electronic portals. Who needs memory? Who needs flesh?

FR: How do you go about making these recordings? Do you set off with a destination in mind or just drift?

VC: It’s a bit of both. The Tate and St. Paul’s are places I’ve always liked singing in because of the resonance, so they were planned. I heard the construction site by chance and didn’t have my recording gear with me, so I rushed home to get it. I was lucky to get back just before the machine went into that heavy rock rhythm! Otherwise the rest were drifts.

These wordless vocals themselves derive partly from a folky earthiness coupled with a willingness to move from smooth glides right through all the intermediate phases into burring, raspy yelps and squeaks. She still sings Turkish folk songs and Greek rebetika. Often understated and subtle, nevertheless quite startling outbursts occur sporadically. Always the location remains intact and is never smothered. Space is left for destinations to breathe and be themselves. Once she has found a starting point, a tendril of sound is spun out that takes its coordinates from the locality as and when they emerge, taking a monody for a walk.

FR: Do you do these walk/listen/sing perambulations wherever you are in the world?

VC: Yes it’s interesting in different contexts. Right now I’m at an artist residency in California in a forest so it’s been fascinating to sing really quietly at the level of sounds here.

Viv Corringham places the artist within the frame and locates the human voice within the city. She liberates interpretive singing from the galleries and gigs and uses it as a tool to tease away at details in the matrix until they gleam by themselves. Repeated listening to Gum and Butts produces an assimilation of the voice into the field recording and the work functions as a whole. A singular pleasure.

Contained in the very limited physical release is a map, a small section of collage and a piece of chewing gum which lends a fresh, minty smell to the proceedings. As always with this label a download is available too. These credits from the Linear Obsessional website say it all really:
Viv Corringham – Voice
London – Sounds"
Chris Whitehead - The Field Reporter
thefieldreporter.wordpress.com/2013/11/11/326/

"'There’s a field recording forum website and people were talking about a whole set of ethics about how much a field recordist intrudes upon the recording itself, how they do or don’t make their presence felt, how your frame the recording or how you place the microphones. It was quite a heated debate.'
Richard Skelton, The Wire 359

Well, I’m pretty sure these field recording purists would be turning in their all-weather clothing, were they to take a listen to this six-track album by vocalist and sound artist Viv Corringham.

The album is a series of recordings of Corringham’s walks around London, overlaid with a variety of idiosyncratic vocalisations. She coos, sputters and howls – but also lets fly with some rather beautiful wordless singing, at times sounding like a flock of ghostly doves, at others like a softened Theremin.

The album was released back in October on Richard Sanderson’s prolific and fascinating Linear Obsessional label. It’s available from the label’s bandcamp site, digitally or as a limited, numbered edition of 22 CDRs. Physical copies come with some free goodies to enhance your listening experience.

Even by Linear Obsessional’s high standards this album is a gem. Corringham is an experienced and skilful improviser, capable of marshalling all sorts of sounds and vocalisations, from the melodious to the abrasive. But it’s the juxtaposition of the field recordings and Corringham’s improvisations that really differentiates it.

In ‘Construction Site – Moorgate’, she’s in full-on guttural form, stuttering and growling one second, then racing up to a higher register, with a sound like an old-fashioned kettle when it’s on the boil. The vocals bring out the rhythms of the banging and clanking of the construction works, resulting in a something remarkably like an early Throbbing Gristle recording. In other places – ‘Tate Modern’, ‘Borough Market’ – they add bubbling, warm textures to pieces that might have seemed too austere without them.

The recordings are never deployed as mere background colour. For one thing, they’re very clearly recorded, enabling us to get lost in the warp and weft of a thousand everyday conversations or, in the case of ‘River Thames – East from Queenhythe’ to get lost in the ambient drift.

But the real success of these pieces comes from the fact that Corringham’s vocalisations, perfectly judged that they are, never dominate. Instead they frame what she sees and hears in her walks, managing to be both part of each scene and apart from it. She’s like a quizzical alien, observing us humans from afar and reporting back to her mothership in a strange, unknowable language."
-We Need No Swords
weneednoswords.wordpress.com/2013/12/13/viv-corringham-gum-butts/

"The document of a somewhat incredible project wherein Corringham does site recordings in various places while improvising a vocal performance (mostly extended techniques, and some freeform sung tones) in response to the space and to what she hears. This kind of interaction with environmental sound is thoroughly intriguing to me, especially when done with something so intimate as human voice. I often find myself responding to this album with my own vocalizations, allowing my own surrounding environmental sounds to intermingle while listening, all barriers falling away. This is a captivating recording, I can’t recommend it enough."
Vuzh Music Blog
www.vuzhmusic.com/blog/

"Viv Corringham wanders the streets of London in this fascinating set of field recordings, capturing her improvised vocal interaction with the ambient sounds of the city. In six locations - Borough Market, the Thames east from Queenhythe, St Paul’s Cathedral, a Moorgate construction site, Kings Cross Station, and Tate Modern – she haunts the areas, leaving momentary sonic imprints. Corringham offers spitting pants in response to the swirl of water; when faced with the conversational static of the market, she answers with her own confused babble; clear snatches of the talk of passers-by are cut-through with a wasp-like drone; all these gestures and many more closely, if briefly, meld her with her surroundings. The recording is excellent, capturing stamps of feet, the clatter of roadworks, the buzz of an over-passing airplane; Corringham is often entirely absent, happy to let the space she is in speak for itself, only contributing a duet at some personally intuitive moment, acting as our ears on her path. The voice sounds disembodied, drifting free around its environment, alighting here and there to interrogate specific aspects of the soundscape.

The chaotic jumble of noise that encompasses the collected noise of a city both welcomes and buries, at times Corringham is lifted above the general clamour and at others completely subsumed. ‘Gums + Butts’ is captivating, oddly intimate, feeling like an invitation to an eavesdropping; a contemplative ramble through spaces not usually paused in, and appreciated for their accidental but nonetheless beautiful music"
-Michael Holland, Ears for Eyes
ears4eyes.blogspot.co.uk