by Colin Webster and Graham Dunning 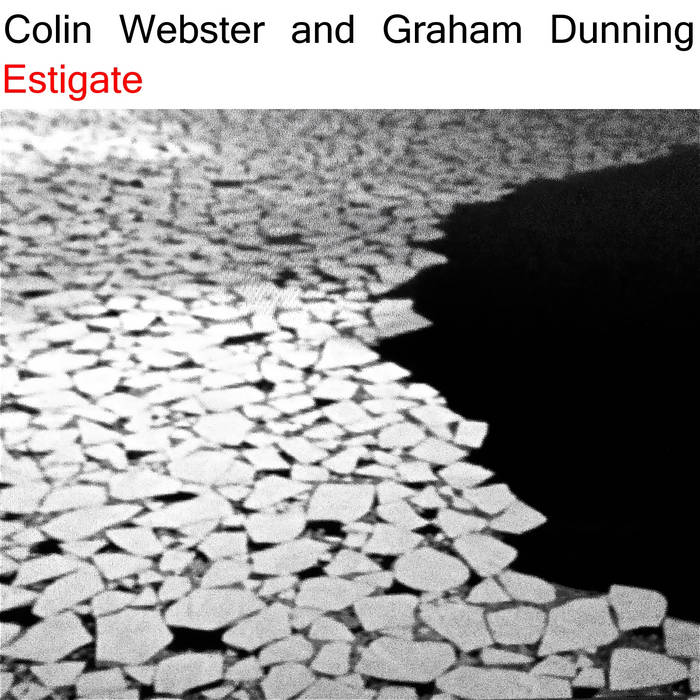 In the duo of Colin Webster and Graham Dunning, Colin improvises exploring a strict palette of minimal saxophone sounds, with an emphasis on breath and mechanical noises over "pure/natural" notes. No effects or external processing are applied to the saxophone sound. The aim is to produce sounds that could be interpreted the listener as synthetic or electronic in nature. Graham uses cheap DJ turntables and dubplates of his own field recordings, avoiding scratch DJ techniques in favour of a palette of noise, hum, crackle, drone and scraping sounds. In parts he also plays the platter itself, the case and lid, and employs brushes, dentistry tools and pencils in sound making.

Recorded on 12th January and 15th August 2012 in a storage facility in South London.

All tracks recorded live. No overdubs or cuts.

"‘Estigate’ is the first release in a planned series of improvised duos from the Linear Obsessional label. This album pairs Colin Webster playing tenor and baritone saxophones, with Graham Dunning who employs turntables, mixer, and dubplates, occasionally manipulated with brushes, dentistry tools, and pencils. The music they create is fascinating, the sound is fibrous and often timid; coaxed into being, as if from a hiding place, brought into unaccustomed exposure. Sighs, pops, and short darting flurries from Webster are tossed into Dunning’s drifting net of soft threads; he conjures rough tapping scrapes, hissing crackle, and undulating moans, all bedded in a surreal fumbling clickscape.
‘Estigate’ seems austere at first; a minimum of sounds and movements combined in communication; but a closer examination reveals a profusion of activity, albeit within a minimal framework. Both instruments are explored intimately and expansively, micro-gestures magnified until they appear divorced from their source, the individual contributions of each artist disguised in a closely knotted dusty melee. The two artists entwine in tentacular fashion, sounds curling together in a perpetually collapsing helix.
Linear Obsessional has a large catalogue of idiosyncratic creations, a gallery of the bizarre that deserves a deep dive; a singular label releasing regularly amazing music with an accessible ‘pay what you like’ download policy and a commitment to producing high-quality physical editions. ‘Estigate’ is another imaginative entry into this already distinguished warehouse of brilliant avant-weirdness."
-Michael Holland,Eyes For Ears
ears4eyes.blogspot.co.uk/2014/02/colin-webster-and-graham-dunning.html

"Recorded in a London, UK storage facility over the course of two days in winter and summer 2012, this stimulating set of eight live improvisations is a soundtrack of things confronted in their raw state.

Colin Webster draws a kind of elemental expressionism from tenor and baritone saxophones, making all the parts of the instruments audible as he figuratively disassembles and reassembles them as he plays. Through key clicks, overblown notes, air sounds and multiphonics Webster conveys a vivid picture of the player transmitting ideas directly through the instrument’s material. Complementing him is Graham Dunning’s turntable, feeding in Dunning’s field recordings via dubplate supplemented by a spectrum of pops, crackles and the mechanical groan of motors running down under pressure and then returning to speed.

Although fully improvised, the tracks all embody an inherent sense of composition that makes good use of variations in density and timbre through layering and sonic contrast."
-Avant Music News
avantmusicnews.com/2014/04/08/amn-reviews-colin-webster-and-graham-dunning-estigate-lor050/