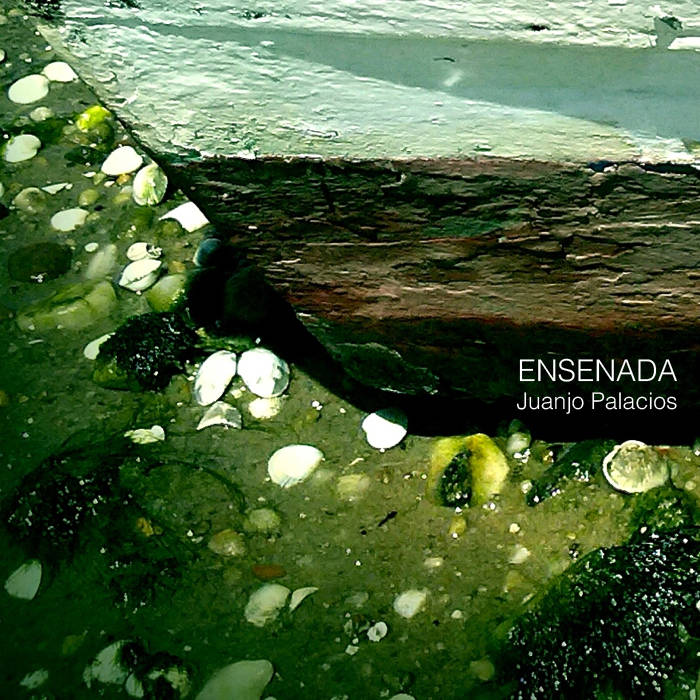 Linear Obsessional has wanted to release something by the Spanish sound artist and phonographer for over two years. I'm delighted to present this extended and engrossing piece-
__________________________

Ensenada de San Simón is such a legendary place that even Jules Verne was fascinated by it. It was here, in San Simón, where the French science ﬁction writer placed the docking of the Nautilus, commanded by Captain Nemo, in his fantastic novel Twenty Thousand Leagues Under the Sea. San Simón island was inhabited in prehistoric times and during the Roman occupation of the Iberian Peninsula. However, it was the Knights Templar who put it on the map when, in the XII century, they founded a monastery that later belonged to Franciscans and then to Isabel la Católica. Francis Drake, the famous pirate and corsair, sacked San Simón island at the end of the XVI cen-tury. One of the most relevant events that took place in the inlet was the naval battle of Rande in 1702, which confronted the Anglo-Dutch and the Franco-Spanish forces in the War of the Spanish Succession between the Austrians and the Bourbons and that ended with the defeat of the latter. It is said that one of the sunk galleons keeps a hidden treasure which has not been found yet. Year after year, many expeditions searched of the gold from the old galleons that lie in the bottom of the Vigo estuary but without any luck. As a result of the English victory in the seas, the city of Vigo has been honoured with a street name in London, known as Vigo Street. Some years later, the island was forgotten until it became a leper colony and quarantine site until 1927. During the XIX century, the island was used to conﬁne crew members and passengers of the ships that sailed those latitudes and were suspect of carrying infectious illnesses. This is when the bridge that joins San Simón to the adjacent island of San Antón was built. In fact, when we speak about San Simón we are referring to two islands (San Simón and San Antón), which are very close to Cesantes beach in Redondela. During the Spanish Civil War, San Simón was used as an extermination camp and penitentiary for those prisoners opposed to the Francoist regime. It was one of the cruellest camps of the dictatorship. Between 1936 and 1943, more than 6,000 republican prisoners were kept there. Many of them were executed by ﬁrearm. For this reason, and in order to keep this memory, the island has been restored and now it is a protected area where trees and gardens have been regenerated. A cultural centre with a library and a concert hall have also been built. Nowadays, it is known as Isla del Pensamiento (The Island of Thought), a space where culture is encouraged and whose main aim is to attract thinkers of international relevance.

JUANJO PALACIOS - Field recordist and sound artist. During the last few years he has developed several projects related to soundscape and composition in which, through sound, he has not only investigated landscape, territory, identity, memory and heritage but also everyday life. In 2009, Juanjo Palacios created "Mapa Sonoru", a soundscape project in Asturias. In 2011 he founded "La Escucha Atent"a, a platform devoted to phonography which, from 2012, also has its own label co-directed with Edu Comelles and focused on ﬁeld recordings. Juanjo Palacios is a collaborator of LABoral Centro de Arte y Creación Industrial where, from 2011, he coordinates a working group linked to Mapa Sonoru. Starting in 2012, and together with José Manuel Costa, he is a curator of the project “…y su sonido”, a series of speciﬁc soundscape studies from an artistic point of view. From 2013 onwards he is co-editor of MASE, a project around the history and presence of sound art in Spain. ! His work has been exhibited or broadcasted in Museo Reina Soﬁa in Madrid, LABoral Centro de Arte in Gijón, Matadero Madrid, Centro de Arte La Regenta in Las Palmas de Gran Canaria, Sala La Gallera in Valencia, Museo Barjola in Gijón and Sala Laudeo de la Universidad de Oviedo, among many others. His sound compositions have been published by different labels in countries such as Portugal, England, Belgium, Colombia, Mexico or Spain. He has conducted workshops and given lectures on phonography and soundscape, designed ambiences and performed in concerts in several festivals and art centres.

Ensenada is a soundscape composition made from ﬁeld recordings taken in Ensenada de San Simón (Pontevedra, Galicia, España) in April, 2013.

Thanks to Richard Sanderson and escoitar.org

REVIEWS-
"What’s this ? It’s a field recording. You sure ? Yes, I am, but I also want to locate this place upon the map, then I’ll check about information. History. Land.

The interesting angle lies in that it’s the intruder’s presence that makes the place sound. Makes it come to (hearing) life. Amazingly, at some point, a curiosity engine sneaks into the picture, as if to paying a routine visit, then soon leaves, as some frantic human activity occur in the foreground. Apparently, the patrol-boat didn’t see what we can hear (from the other side of the speaker). Unsure if we should rejoice, let’s push the exploration further on. Wetness again, more walk, magnified snippets of soles crushing soil, but there’s no finding the goddam treasure.

Is the pain-drenched place (check out for full historical data of the island) playing tricks on our sanity ? Are we going in circles ? We’ve been here before, look at your own tracks there ! Or have we ? (no one is sure, let’s climb aboard and sail to the southern coast of the island, providing we can trust this instrument)."
-Hazel Lee,The Sound Projector
www.thesoundprojector.com/2015/11/08/ontological-mystery-tour/