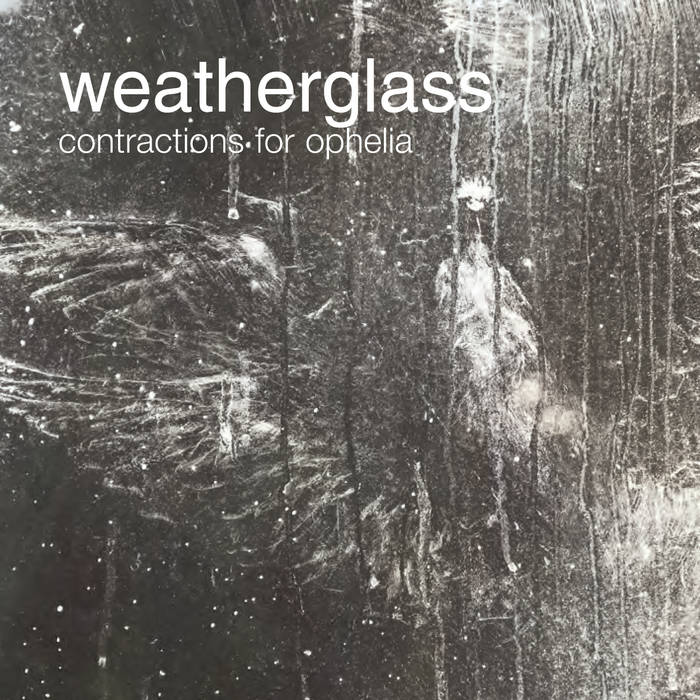 "Much of the music on Contractions for Ophelia was used as background to the birth of Weatherglass's grand-daughter, hence the title. All the music originated on acoustic instruments, including plucked and bowed acoustic guitar, lapsteel guitar, harmonium, accordion, dulcimer and found objects. Cornwall and Sykes Reservoir feature as special environmental guests, and vocals were supplied by various waterfowl and a budgie." - Weatherglass

REVIEW-
Contractions for Ophelia is a drone album with a dedication. The Ophelia of note is not the spurned lover of Hamlet, floating down the river, but the granddaughter of the artist, floating in the womb. Some of the music here accompanied her birth, but much of it sounds like the time Ophelia spent in utero, suspended and twirling like the star baby in 2001. The roster contains a wide spectrum of invited instruments, including harmonium, accordion and dulcimer, but adds special guests such as the budgerigar (budgie), seen in the accompanying photos.

The first half of the album seems to represent the safety of the womb. Nebula swirls and low chords form the album’s first drone, imitating darkness. While higher notes eventually emerge, the darkness remains. Ambient washes create a lulling effect on “Iced Webs”, similar to the sounds of the Glacial Movements roster. (No surprise, given the title.) The ghostly voice of “The Erosion” is reminiscent of rubbed glass rims, but may be interpreted as the call of the midwife.

And then, clarity. An acoustic guitar takes the foreground, soft but bright, offering a welcome in the form of a lullaby. The drone may still play in the background, but it’s no longer the lead story; Ophelia has arrived. But where are the budgies? There ought to be budgies. They are clearly not allowed in the delivery room. Bowed playing and some screeches follow, reflecting the pride of a new grandparent, who reflects, I must have done something well, and the cries of a newborn, who is certainly confused by hearing these odd noises. “Zawn” is particularly unusual, a shifting drone piece with multiple layers that refuse to settle quietly on top of each other. The hornlike tones that enter at 2:10 provide the album’s most triumphant moment. The drones on this piece may sound like snores, but this sound is a clarion: the blinds opening, the sun shining in. The descent back to acoustic guitar is particularly well done. By the end of “Blessings for Ophelia”, the mood is again calm: everything and everyone are okay, and good wishes are exchanged. This may not make a good soundtrack for your own family’s next birth, but it’s a sweet reflection of Ophelia’s. (Richard Allen in "A Closer Listen" acloserlisten.com/2012/06/16/weatherglass-contractions-for-ophelia/ )