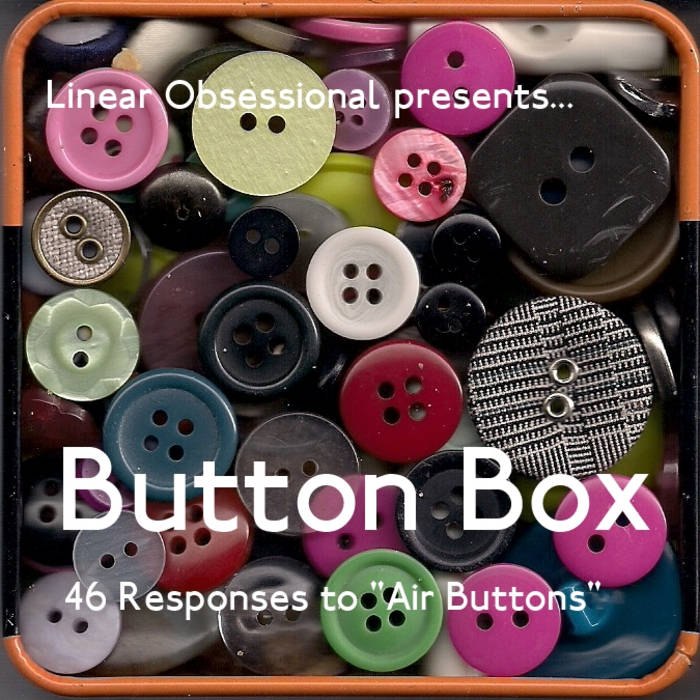 "After releasing my album of melodeon and electronics improvisations, I decided to ask my friends whether they would be interested in reworking any of the material- 'Please take any music at all from the new release ("Air Buttons" by me) and do what you want with it - mangle it, remix it, add things to it, sing over it, play a duo with it, slow it down, turn it into a tune, cut it up, whatever. BUT please make your contribution EXACTLY TWO MINUTES LONG'.
I was astonished by the reaction- soon sound files were flying at me from all over the world, including from friends of friends of friends, as well as from people who I've known since school days- collaborators from my post-punk days, free improvisers, morris dancers, other Linear Obsessional artists, even my next-door neighbour! The results are amazingly varied in style - and all are fascinating, and of course, none of them outstay their welcome.
So- enormous thanks to all my friends in the UK, France, Spain,Ireland, Sweden, USA and Malaysia, you have made me very proud"
-Richard Sanderson 2013

REVIEWS
"Sanderson invited artists to adopt his source material however they sought fit, with one provision: each track had to be exactly two minutes long. Button Box is the result, an amazing 46 tracks from sources as close as a next door neighbor to as far away as distant continents, from virtual unknowns to Lee Noyes and Linear Bells. As one might expect, the collection is vastly uneven, yet endlessly fascinating. In the hands of Dead Voices on air, “Stalactite” (only two minutes long to begin with) becomes the thicker ”Stalagmite”, while Kate Denny changes it to the percussively odd “Stalacbite”, with heavy breathing. Weatherglass creates an ambient piece with “Rubato Tins”, while skitter goes in the opposite direction and makes everything sound abrasive. Mick Scrivens adds piano; Peter Marsh adds a beat (partially taken from the clock sample in “Shade”); Kendo adds real drums; K.A. Laidy adds a monologue; Clive Pearman adds a banjo; Steven Ball sings. At times the air buttons seem to have gotten lost in the couch, but everyone seems to be having a blast. There’s enough here for every taste: ambient, drone, rhythm, singer-songwriter. (And not just straight singing; some very unusual inflections are on display.) It’s fun to think of Sanderson’s reaction when all of these remixes started coming in. Together, the albums create a fascinating pair, one that deserves to be repackaged in a physical set with actual buttons. The melodeon isn’t a common instrument, but this album may help to increase awareness"
-Richard Allen, A Closer Listen
acloserlisten.com/2014/02/08/richard-sanderson-air-buttonsbutton-box/