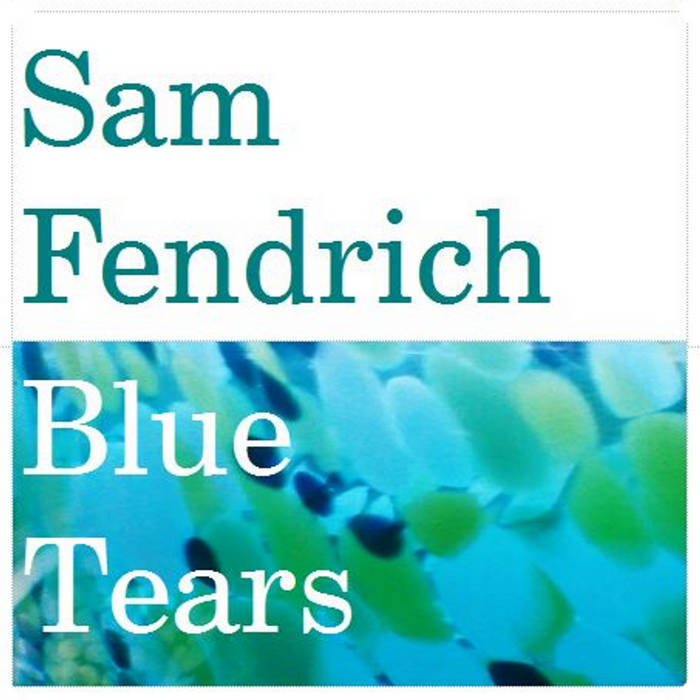 a Jazz Noise "...a highly personal, angular, dissonant, almost deranged, and shattered vision of the blues."
Full review at: bit.ly/SFenBT

Dear Richard
As is no doubt obvious to you, “Blue Tears” is in some respects, a new ‘compositional’ approach for me in the following sense. Whilst the ‘style’, ‘techniques’ etc of “Blue Tears” figure as elements in many of my pieces here they are presented ‘raw’ ie divested of the other encompassing compositional elements. I have suppressed my ‘maximalist’ sensibility (or ‘label’) for reasons that i hope will become clear.

The story of “Blue Tears” started last July with the sudden and shocking death of my oldest friend JC. ( We met in the school jazz band (he played trombone and guitar), he introduced me to Robert Johnson et al, we made music together, he was my Best Man (on at least one occasion) and on and on. Also - he was the oldest of a long list of brothers (and a sister) and halfway down that line was BC - a far from insignificant character in this story. (See below.)

As always I dealt with my feelings (typically inadequately) by expressing them through music - the result was “Blue Tears” - the blues as “anguish” - (!) but with the Konzuaala Kuzenstan seal of approval.
*
A PORTRAIT FROM BEHIND
rough brian
a still drying concrete man
held together inside
with too many elastic bands
comes from the school of rock and roll
and underground ways of london,
catacombs made to tremble
by his supernatural voice
panicking commuters
blind to his tender fingers
on a borrowed guitar.
I knew his brother
but he showed me how to sing
[from: LINES p.189]
*

____________________________
REVIEWS
"Recorded following a bereavement, in Fendrich’s own words, this is, “the blues as anguish”. Featuring primarily guitars and keyboards*, and a little vocalising here and there, this is a highly personal, angular, dissonant, almost deranged, and shattered vision of the blues.
Minimalist in the sense of few ingredients but also frequently dense and overwhelming (play it at volume), standout moments include the boiling acid intro to Fake Blues 4, the slowly-resolving (or -dissolving) distorted piano on the title track, and the aching music box pop shadings of closer, Fake Blues 1. My personal favourite is Fake Blues 3, possibly the most obviously blues-y to begin with, it soon mutilates itself and recombines the resulting parts in more avant fashion.
Fendrich pours incomprehension and woe into these tunes, celebrates his oldest friend and rails against his loss. Often harsh, clearly idiosyncratic, and always from the (broken) heart, this is blues for now"
A Jazz Noise
ajazznoise.com/sam-fendrich-blue-tears/

"Sam Fendrich is a composer born in Siberia who has made his home in London. After hearing the impressive Blue Tears (LINEAR OBSESSIONAL RECORDINGS LOR110), I wanted to find out more about this fellow. He has made another record for this label (The Unquestioned Answer, 2014) but before that appeared sporadically on various comps, such as the Unknown Public series, since 1994.
Fendrich might be one of these well-seasoned veterans who has had an interesting life outside of music, given his extra-mural activities as a lecturer in mathematics and philosophy. The fact that he also played poker for a year is not lost on me. Gavin Bryars (fellow bass player) made a composition once using the voice of a professional card player, and if so inclined one might write a speculative one-page essay which connects games of chance to the compositional strategy of John Cage, but that wouldn’t be a very fruitful line of enquiry. In any case Blue Tears has no connection to the cold and dessicated Cage, as it’s full of the juice of life, informed by improvisation and jazz, and is the result of a very personal emotional expression on behalf of its composer (the story of it is printed on the back cover). Fendrich has a strong jazz connection having played bass in jazz and folk groups, and anyone who can come up with a title such as ‘MMIINNGGUUSS GGRREEEENN’ (not here, by the way) indicates he has heard a lot of Mingus recordings, and can probably communicate directly with the great Mingus by means of telepathic airwaves beyond the grave, and as such is A-OK in my book.
Traces of jazz do indeed show up in Blue Tears (and there’s a lost Bill Evans or Miles Davis title if ever there was), but so do many other musical and sonic elements – including psychedelic rock, blues, funk, dance beats, baroque harpsichord fugues, and outer-space African electronica thumb-piano music. The entire album is played by Konzuaala Kuzenstan, a person about whom I can find out precisely zero; not even sure if she’s a man or he’s a woman (or if it’s in fact an alias for Fendrich), so forgive my ignorance. Kuzenstan apparently realised the record with various keyboards, but drum machines occasionally punctuate the music with klunkoid beats, and there’s a wailing voice on at least one of these tracks. Throughout, great use is made of distortion; if that’s a Fender Rhodes electric piano, it’s been dirtied up to a high degree possibly using the “Greasy New Orleans Funkoid” setting which is now standard on new builds of that instrument, and creates an “impure” sound that would make Joe Zawinul wither into a dried raisin.
On top of all this, every track is different, exploring a radically different approach to the theme, taking the listener into unexplored turfdoms, with incredibly inventive melodies, ideas and rhythms that Konzuaala Kuzenstan executes with fluid ease and well-articulated phrases, almost as if the music were as personal to them as it is to Sam Fendrich. The press notes inform us that this basic “keyboard and distortion” approach is simpler than previous Fendrich works, which are typified by their “maximalist” nature. I find this somewhat surprising, given the rich surfaces and emotional depths of Blue Tears, but clearly I need to investigate a bit further. Many musicians nowadays want to inhabit tons of musical genres and styles, and indicate their willingness to do so not by exerting any effort, or working hard at their craft, but by simply listing the highlights of their record collections 1. Conversely on Blue Tears, Sam Fendrich pulls this off without even breaking into a sweat, effortlessly cross-pollinating the seeds of important musical strains into his own brilliant many-headed hybrid.
Despite the fact that every track is called ‘Fake Blues’, there’s nothing fake about Blue Tears – this is the real deal. Can’t say enough good things about this great record, and I can’t believe it’s “only” a CDR. We should all start lobbying now for a vinyl edition"
Ed Pinsent - The Sound Projector
www.thesoundprojector.com/2019/02/04/sams-outer-space-blues-room/