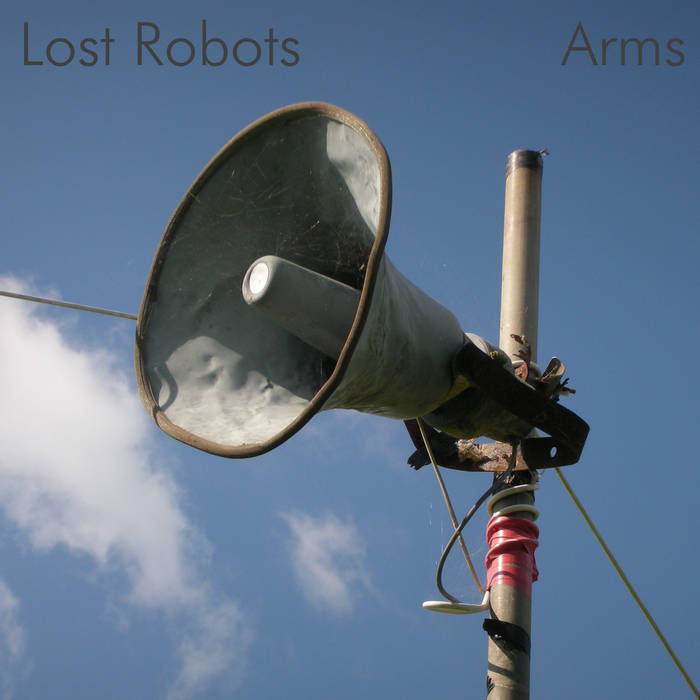 "Arms" is the long awaited second studio album by the London avant-rock quartet Lost Robots, the follow up to "No" released by Orchestra Pit Recordings. This has a more cohesive feel, as there's less instrument swapping and more definite "band-feel". The usual influences are noticeable - early Can, This Heat, "Hex" period Fall and Italian Gallo soundtracks. Vocals are tackled by Richard Sanderson and Mark Braby and each includes a spoken word piece with musical backing. The music was entirely improvised in the studio and then edited and overdubbed, to create a powerful document of a band struggling to contain its enthusiasms.

REVIEWS
"the kind of waywardly playful and noirish experimentation that was rife in the post punk era. Plenty of scraping guitars, probing bass, narrations and incantations. Entertainment with a wry cerebral smile. The Family Fodder, or Swell Maps at their more outre spring to mind."
Sticky Floors
www.stickyfloors.net/gig/2018-01-26-dublin-castle-london-revenge-of-the-soundman-hercules-ii

"Lost Robots is another one of Richard Sanderson’s “rock” projects. Another one was his teenage band Solaris who never made any records in the 1970s, but reformed when older and made recordings in 2010 and 2012. Mention Solaris we must due to tenuous “krautrock” connection, valid in context though term is contentious, since Can and Faust are namechecked as influences for this organ-guitar-bass-drumming-vocal music, or at least cited as “in the manner of”. Much the same way that Beefheart paints “in the manner of” De Kooning. Record is Arms (LINEAR OBSESSIONAL RECORDINGS LOR 072) made in Brixton in 2015. Other Robots are drummer Mark Braby from famous post-punk band Subway Sect, bassist Andy Coules (from Big Horse) and guitarist Clive Pearman from Os Dados. Sanderson’s bizarre organ tone (and his occasional clarinet) is probably the winning element in the band sound for me, though Braby is great too. He’s so “on” you can’t get a melon past him. There is much to praise in their group-improvisational approach to playing rock, which does indeed depart from many conventions and rip up any rule books that may come to hand. This means pieces do not end as they begin. In some cases they don’t even end at all. Instruments don’t follow the “normal” rock standards or dynamics, instead things are wodged together in freaky lumps of all-at-once playing. Or even more unusual, components are separated apart into gaseous mists when you’d least expect it. Good economy, meaning Lost Robots often deliver on the kind of tension and space and spare playing we’d always hoped to get from post-punk bands in the UK, many of whom capitulated the second they got a name producer and entered a studio. Especially effective is ‘La Donna…’ track which does much to earn them the tag “in the manner of” This Heat. Less keen, me, on the tracks with vocals, which are not quite songs but rather dreary recits of lunky poetry spoken in plain unvarnished accents. Loudspeaker image on cover is also something of a gaffe in this context, but pound-for-pound there are some tasty cuts of prime meat in this cannister. Those piqued may wish to hear their 2008 record No for Orchestra Pit Recording Co., jointly issued with netlabel Fat Ghost. Some sessions for that were recorded in Sanderson’s living room.
Ed Pinsent, The Sound Projector
www.thesoundprojector.com/2018/06/01/pressure-cookers/