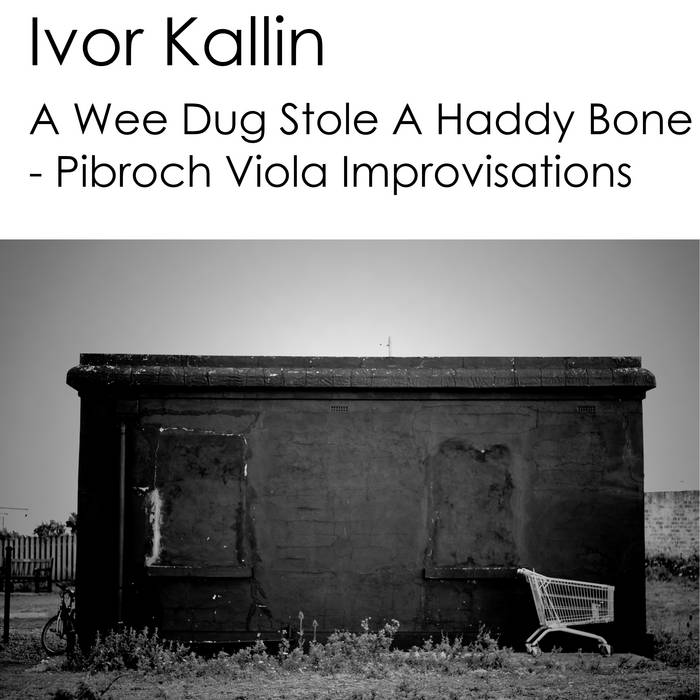 The viola improvisations are inspired by the classical Scottish pibroch bagpipe tradition, with the vocal canntaireachd, accompanying the melody, if you can call it that. In the style of George Benson or Tristan Honsinger, you might say. The recordings are live, either from Smoo Cave near Durness, or in my pre-decorated bedroom, I can't quite remember, but date from February 2012.
-Ivor Kallin

Ivor Kallin currently plays bass with Ya Basta, and has done for at least two decades, bass with the Horseless Headmen, viola with the improv string trio Barrel (check out Gratuitous Abuse, the CD) and in the London Improvisors Orchestra (CDs on Emanem and Psi), previously played bass guitar with the London Electric Guitar Orchestra (several CDs on 213Music), made a CD on location in Glasgow with John Bisset (A Schlep from Strathbungo, on 213), and collaborates with the same person regularly making stupid but intelligent films for www.2-13.co.uk and occasionally rants bloody awful poetry as Ambrosia Rasputin, which was also the moniker adopted whilst hosting a regular radio show on Resonance FM. He is an Orient season ticket holder, and keeps a close eye on the results of Queen's Park and Pollok FC. He has recently become a grandfather, so that shows you how old he might be.

REVIEWS-
Emptying his East London bedroom to decorate, the viola player Ivor Kallin noticed its exceptional acoustics, and he's rush-released the recorded evidence as a free download from Linear Obsessional. Kallin, a transplanted Glaswegian, claims to be playing viola in the Pibroch tradition of extended bagpipe compositions.

If you like A Wee Dug Stole A Haddy Bone - Pibroch Viola Improvisations, you may also like: