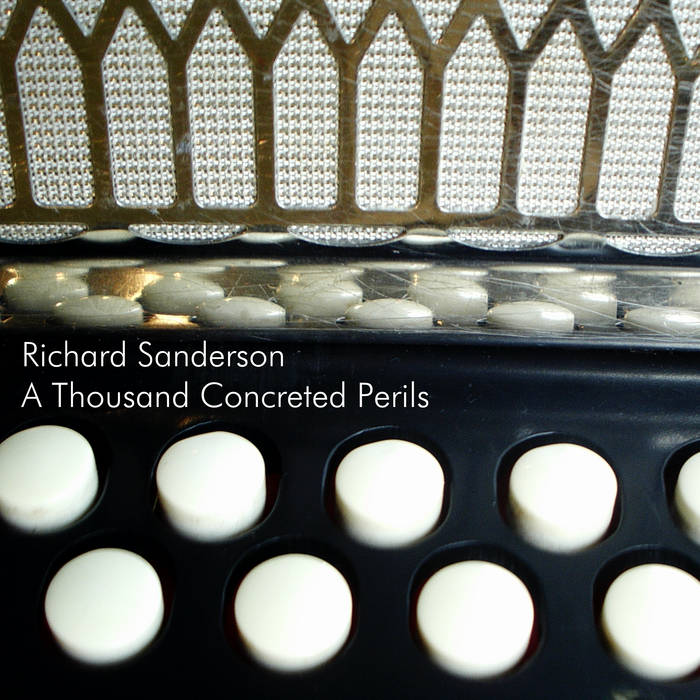 Kate Laity The head of the incomparable Linear Obsessional Recordings, Richard Sanderson, has come out with a recording of his own that to my mind embodies the kind of thing that would delight Oliveros. A Thousand Concreted Pearls offers up the kind of meditative experimentation that really rewards attentive listening. If you think ‘accordion’ and immediately blanch, this is the album to change your mind forever as to what the instrument can accomplish. Endlessly fascinating and engaging.

All tracks recorded by Richard Sanderson, except "Memory Commitee" and "Light Leaks" which were recorded live at Hundred Years Gallery, London by Graham MacKeachan.

REVIEWS
"Richard Sanderson’s previous album of solo melodeon improvisations, Air Buttons, came on like some ancient Radiophonic soundtrack to a long-lost children’s TV series. Its bare, metallic tones were simultaneously ancient and modern, analogue computer music composed by Viking scientists, perhaps. Past and not-quite future superimposed on a faulty VHS tape. This follow up, also released on Sanderson’s own Linear Obsessional label, fills out Air Buttons’ frosty skeleton, the melodeon wheeze augmented by electronics, either triggered by the instrument or Sanderson himself, as well as the cheeky odd scrape and tap of extended techniques. That the album’s track names seem to have been spat out by an underground music name creation algorithm only adds to the fun, with titles like Instamatic Flamer and Memory Committee having the syllabic heft of an automatic writing competition convened by Messrs Smith, Ballard and Bowie.

A Thousand Concreted Perils may not quote have the uncanny chill of its predecessor, but it’s an affecting listen nevertheless, its stippled waves of electronics adding a depth of colour and breadth of texture to Sanderson’s always-considered explorations. In Pascoe Tambura, the melodeon’s native heave is almost totally absent, transmogrified into a full-spectrum shimmer, its Technicolor vibrations like the Aurora Borealis viewed through a fungal prism of warm and throbbing psychedelia. Pre-Cheltenham Coda is another good one, melodeon chords giving way to a sustained high drone as a soft, almost brassy tone moans in the distance and dull rattle inhabits the foreground. It’s at times reminiscent of Sanderson’s trio with Mark Wastell and Matilda Rolfsson (melodeon, Tam Tam and percussion) but with Sanderson handling all three parts for a slice of numinous, neo-pastoral improv.

There are the occasional callbacks to Air Buttons’ sparseness. The shrill oscillations of Light Leaks, recorded during one of Sanderson’s solo sets at the Hundred Years Gallery in Shoreditch, echo the aluminium sheen of that other album, although it’s matched here with choppy, aggressive playing to make for a fractured and grumpy affair. Drought, meanwhile, edges its misty tendrils out slowly, like the slow sunrise over a moor in winter. There’s even time for Sanderson’s beloved traditional music, with a nicely haunted take of Down in the Meadow, inspired by the Romani singer Jasper Smith, in which Sanderson’s ghostly vocal hovers over his droney, bare bones accompaniment and even the waft of bucolic field recordings can’t shift the desolate feel. The result is about as comforting as a lamb’s corpse in a ditch"
-Paul Margree "We Need No Swords"
weneednoswords.wordpress.com/2016/09/08/richard-sanderson-a-thousand-concreted-perils/

The lovely Richard Sanderson is here with A Thousand Concreted Perils (LINEAR OBSESSIONAL RECORDS LOR081). It’s been three years since he last turned in a solo concertina record (Air Buttons), and now here are a further 11 experiments where he applies a mixture of methods to change the sound of the instrument, open up new avenues for exploration, and generally push at the three corners of the envelope. Technically speaking, he does it with FX pedals and feedback, and even the use of computer software to manipulate sound, but it’s also clear from the enclosed notes that his mind is in a thousand diverse locations as he negotiates these thousand concreted perils. In a few terse sentences, he speculates on the joys of note-bending, he likens his bellows to a pair of lungs, he relishes the bad behaviour of broken equipment; and he alludes to musical personalities as diverse as Pauline Oliveros (natch!), John Kirkpatrick (also natch), and Jasper Smith *, whose singing was the foundation for the track ‘Down In The Meadow’. Evidently, the tributaries of avant-garde and folk musics flow freely into Sanderson’s palate fine and find a welcome meeting point under his enquiring fingertips. Most endearing of all is the phrase “staring at an astronomical chart to empty mind whilst working out a sound”, and if that isn’t a gorgeous insight into the creative process of this man, then I’ll sell my copy of Lot 74 by Derek Bailey. The close-up photos of the concertina on the cover are a further index to his intimate engagement with the minutiae of sound, the physicalities of the instrument, evidence of which abounds on the disc. Seems to me that Sanderson has quietly evolved his own personal take (very DIY, very modest, very English) on the whole electro-acoustic improv thing. From 7th October 2016.

*For the singing of Jasper Smith – which I have never heard – try and locate a copy of The Travelling Songster on Topic Records 12TS304, released in 1977.
Ed Pinsent - The Sound Projector
www.thesoundprojector.com/2017/05/08/instantic-flamer/