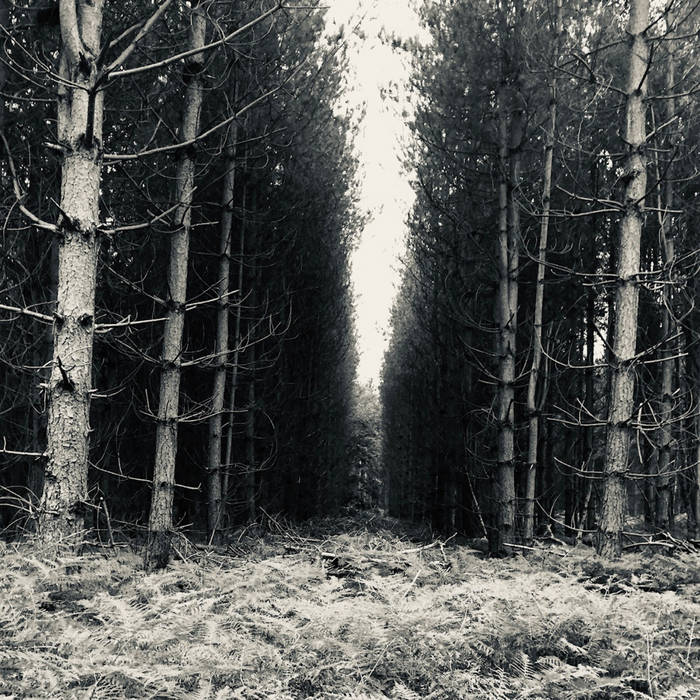 In his latest venture into British audio psychogeography (following previous LinOb albums exploring British quicksands, shorelines and caves) Dave Clarkson takes his tape recorder into remote woodlands - and applies his unique acoustic sense to the results. Some tracks could almost be works by the Radiophonic Workshop - the quirky near click-funk created from twig noises on the first track for example, while others are more desolate and eerie, capturing the unique atmosphere of these places. This is an area of exploration that Clarkson has truly made his own.

Available as a limited edition cassette in the Linear Obsessional Cassette Imprint (design by David Little) with download coupon, and as a download with illustrated PDF booklet.

The ancient woodland of Sherwood Forest forms the backdrop to Twig Dance, amongst the oak trees, birds, insects and fauna. The breaking of twigs, the knocking logs and the snapping of fingers meticulously arranged to form a wooden 7/4 time signature.

Located in Cheshire, Delamere Forest is the largest woodland in England. The area is a habitat for numerous bird species including tawny owls and green woodpeckers. Key sounds from an eight hour field recording ( August 2019: 10pm - 6am) have been edited to just over 2 minutes for Delamere Night Flight.

A wrong turn on a walk in local woods produced a feeling of disorientation during lockdown 2020. The morning fog didn’t help.

No Easy Way Out

The crunching of leaves during a long walk in the woods and eventually a way out. Processed voices make up a choir throughout reminding us there is No Easy Way Out of the woods or our current global situation.

Each movement of an insect life is a type of dance tuned alongside nature. The forest floor provides bugs, crickets, grasshoppers, flies and bees with a stage set for an evening performance. The Insect Dancers was compiled from field recordings from Sherwood, Rendlesham and Burnham Beeches forests, accompanied by a solitary processed drum.

Mausoleum in the Wood

Over two centuries old, the Mausoleum pyramid structure is found within the ancient woodland in Blickling, Norfolk. The stone building is hollow, seeping with water and surrounded by metal railings of different sizes. The outside structural parts of stone and metal enable various percussion notes to be generated together with the sound of water, voices and echo generated within the chamber. Mausoleum in the Wood evolves into a clock in the woods.

Rendlesham Forest consists of nearly six square miles of coniferous plantations, heathland and wetland areas. This is within the area of Suffolk known as the Sandlings. The forest in infamous for reports by the US Air Force of UFO sightings in 1980. Natural forest evening sounds together with distant murmurs, traffic and processed pulses generated from the recording equipment itself make up the Rendlesham experience.

Sound recorded on location. Some left pure, some processed, some mangled, some untangled. Field recordings in woods and forests plus voices, fingers and occasional electronics.


"Over the years I have reviewed some music from Dave Clarkson, from Manchester (Vital Weekly 1185 and 1117, for instance) and much of his work deals with field recordings. This new one is not different. The subtitle here is 'Deep Forests And dark Woods Of The British Isles', and the cover notes, "sound recorded on location. Some left pure, some processed, some mangled. Field recordings in woods and forests plus voices, fingers and occasional electronics". I would think that occasional can also be understood as 'quite a bit'. The PDF that you get with the download gives some more information on the locations. I can imagine that many readers will have an idea of some kind of how this would sound, but Clarkson does something different and at the same time also not. Sue, there are recordings of birds and wind through leaves here, but Clarkson adds his electronics to add a musical layer to the music. This is very clear in the opening piece, 'Twig Dance', with its sampled snapping of the fingers and twigs, adding a jolly rhythm to the music. This sort of sampling returns in other pieces; not all of them. In 'No Easy Way Out', there is a sort of synthesizer melody, courtesy of processed voices. I very much enjoyed Clarkson's approach here, going for something entirely different approach when it comes to working with field recordings. Not by making it all more abstract, more drone-like, more ambient or noisier, but taking it to the stage where it almost becomes pop; and that it is not. Clarkson keeps his pieces short and to the point, adds melodic and rhythmic touches and remains firmly in the world of field recordings. Quite an accomplishment! A most remarkable release." FDW - Vital Weekly
www.vitalweekly.net/1286.html

A couple of years ago I interviewed Josh Hager from Devo for another of my projects, focussed on the Mute label’s STUMM433 boxset. Conversations for that project typically veer quickly into discussions of meditation practice; or, if they don’t directly end up there, we usually find ourselves talking about efforts the artist makes to find peace or a sort of inner silence.

In Hager’s case, he told me about his early experiences after first moving to LA, where he rented himself a loft with no furniture. He may have had no furniture, but Hager had a turntable and an album, The Magic Of Psychoacoustic Sound, containing two sides of countryside noises – an English meadow and a forest night-scape filled with crickets – made by influential field recordist and early digital sound processor Irv Teibel.

Teibel had spent some of his army years in Stuttgart, where his imagination had been fired up by musique concrète, tape experiments, and spells studying under Karlheinz Stockhausen and Tony Conrad. The Magic Of Psychoacoustic Sound was the tenth disc in his influential series Environments, which he began in 1969 with a Brighton Beach, NY recording of the shoreline that was then processed through an early IBM computer.

I ended up buying a beaten-up copy of The Magic Of Psychoacoustic Sound and put it on one Saturday afternoon while the house was occupied by just me and the cats. A couple of minutes in and I was somewhere else, walking the fields and woods of my youth and trying to suppress the notion that, if I hauled myself off the sofa and walked five minutes from my house, I could listen to actual English countryside sounds rather than Teibel’s processed ones. And then something strange happened – the record got stuck. I moved the needle and it got stuck again. And again. And again. I sighed, realising I’d bought one of the most scratched LPs I’ve ever seen but then, as I went to turn the turntable off and put the record away, I became aware that the skipping sounds of pretty meadows had formed an inchoate little rhythmic loop that you could just about dance along to.

I imagine Teibel would have liked Dave Clarkson’s new album for Linear Obsessional, A Pocket Guide To Wilderness – Deep Forests And Dark Woods Of The British Isles. The latest instalment in a series that has included explorations of caves, the shores around Britain and quicksands (who know we had those in this country? In fact, who knew they existed outside perilous scenes in 1980s shows like The A-Team?), Clarkson’s Pocket Guide… series feels like it was directly descended from the Environments releases. His technique is one of processed field recordings, much like Teibel did forty years before, but whereas his approach was to create textural backdrops, Clarkson prefers more extreme alterations.

Take the opening track, ‘Twig Dance’. Here we find Clarkson in the venerable Sherwood Forest using the sampled sounds of twigs snapping and logs being tapped, which he then reworked into a 7/4 rhythm that’s so knowingly reminiscent of ‘Unsquare Dance’ that you expect Dave Brubeck’s distinctive piano to start up at any moment. It’s less psychoacoustic and more psychedelic, like a weird pagan ritual best appreciated through the lysergic fog of foraged ‘shrooms. In contrast, an eight-hour recording session in Delamere Forest from August 2019 ‘Delamere Night Flight’) is largely untouched, until you consider that Clarkson has taken the highlights from that all-nighter and turned it into a comparatively minuscule two-minute edit. (The owl that features prominently on this piece definitely approves.)

Elsewhere, ‘No Easy Way Out’ augments a loop of crunching, trampled undergrowth with ominous sub-bass and a delicate passing cloud of elegiac synth pads to create an uneasy, unsettling feeling, which Clarkson’s accompanying narrative likens to the perilous way out of our shared 2020 experiences. The pastoral, soothing birdsong with which ‘Lifeblood’ commences could have been taken straight from the ‘English Meadow’ side of The Magic Of Psychoacoustic Sound until it is overtaken by a swelling, fluctuating drone full of wonder and gauzy warmth. The effect is to centre your attention on the natural mystery of the world around us, something that we are all too guilty of ignoring.

‘Mausoleum In The Woods’ uses the pyramid at Norfolk’s Blickling Park as its sonic playground, featuring percussive sounds that Clarkson recorded by striking the railings and stone of the Egyptian revival structure. We also hear the voices of fellow tourists and the omnipresent sound of rushing water, all of which lock together with the percussive samples to form a regimented, clockwork-like rhythm interspersed with intricate, unplaceable detail, befitting an engaging, thought-provoking album (I am chiefly reminded of the devastation of ancient woodland for the sake of HS2) that is as much informed by Clarkson’s fervent imagination as it is his curatorial approach to collecting sounds."
Mat Smith, Further
furtherdot.com/2021/05/16/dave-clarkson-a-pocket-guide-to-wilderness-stuart-chalmers-suikinkutsu/

If you like A Pocket Guide to Wilderness - Deep Forests and Dark Woods of the British Isles, you may also like: