A Pocket Guide to Subterranea - Mysterious Caves of the British Isles 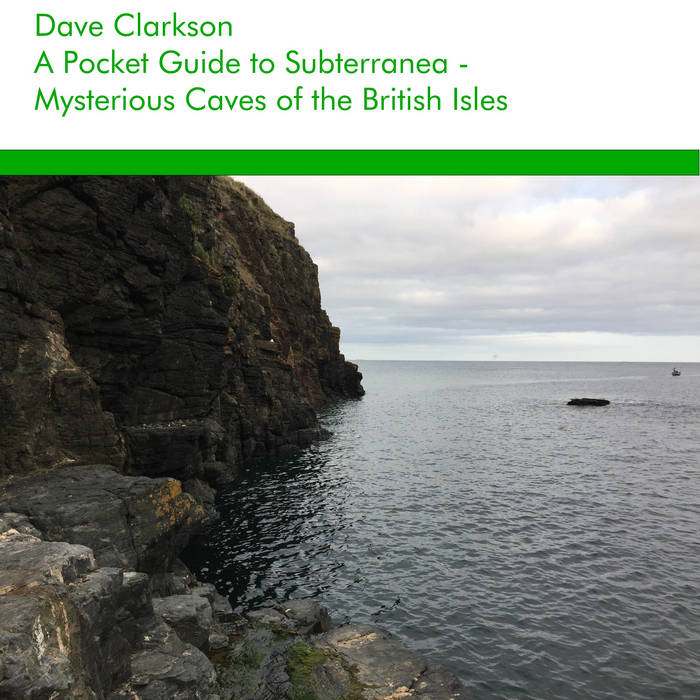 Dave Clarkson's fourth release for Linear Obsessional moves away from the coastal concerns of previous releases to explore the unique atmospheres of the UK's sonically rich underground. Six tracks recorded in unique caves, with no additional sounds to the orginal recordings but "Some left pure, some processed, some mangled, some untangled"
Released as a limited edition cassette and a download with PDF booklet of notes and images - "A Pocket Guide" enhances Clarkson's reputation as one of the most imaginative sonic pyschogeographers in the UK.

The Pocket Guide to Subterrania – Mysterious Caves of the British Isles

Stoney Middleton is a village in the White Peak area of the Peak District in Derbyshire, England. At the eastern end of the village lies a geothermal spring which starts the journey descending into subterrrania.

White Scar cave is located in the civil parish of Ingleton in North Yorkshire, England. It is formed in carboniferous limestone some 6 kilometres long. It is one of the largest known cave chambers in Great Britain. Exploring the cave involves relatively easy access through narrow passages which open into pools and further networks. The sound of water flow and droplets combine with the distant bass rumble, echo and scrapes. Emotional experiences include mood change, anxiety and psychological tension several hundred yards into the cave in total darkness. Outside close to the cave entrance, a percussive water pump housed in a shed enclosure continually works itself.

Blue John is a semi-precious mineral, a form of fluorite with bands of purple-blue or yellowish colour. In the UK it is found only at Blue John cavern at Castleton, Derbyshire, England. The cavern is a vast space of continual low ambient sound encompasing water, stone and distant voices.

Clearwell cave in Gloucestershire, England, is a natural cave system which has been extensively mined for iron ore. There is a deep spiritual feeling of voices on location. Claims of paranormal phenomena have been made over the years including the sounds of metal clanging, footsteps and pick axes.

West Wycombe is the location of the Hellfire caves, man-made and dug by hand in the 1700s. The caves were used by various political and social 18th century figures to conduct pagan rituals. Now a tourist site, the long winding passages present a less natural cave experience but an interesting stroll through history. A quiet ambient piano recording can be heard at the pit of the cave which from a distance sounds like a lone pianist.

A narrow rocky cove set between cliffs on the eastern side of the Lizard peninsular in Cornwall, Church Cove is a cave within the cliffs featuring rock pools, gullies and an area of stunning scenery. There exists a colourful palette of wild water sounds from deep gulps to sea spray.

All sounds recorded on location. Some left pure, some processed, some mangled, some untangled.

Composition, production and mastering by Dave Clarkson at Cavendish House studios during 2018.

No persons were harmed in the recordings.

"Recent solo releases by Manchester’s Dave Clarkson have offered field recordings grouped by locale and/or type of environment. For his latest, he ventured into six caves, gathering sounds and adding nothing else to them. But these isn’t raw audio; Clarkson “processed, mangled, and untangled” the noises he captured, often chopping them up into loops and rhythms without diluting the organic quality of his sources. On “Blue John,” he transforms water lapping stones into a clanging industrial beat, while on “Church Cove” he turns a place rumored to hold paranormal phenomena into a bubbling soundscape. Often the noticeable presence of an editor can weaken field recordings, but Clarkson knows how to add energy to his discoveries, morphing them into glowing, hyper-real versions of themselves."
Mark Masters - Bandcamp Daily
daily.bandcamp.com/2019/06/03/best-experimental-music-on-bandcamp-may-2019

"Here's a new release by someone who has been regularly releasing new music; the last time was'A Blue Guide To Shore Ghosts And Sea Mystery' (Vital Weekly 1117). This time his journey is not along coastal lines but going underground, into the world of caves. He recorded sounds in caves in Derbyshire, Yorkshire, Buckinghamshire, South Wales and Cornwall. The later being a sea cave.
There is a pdf on the website that shows you these places and additional information (it is also part of the download). Back home he edited these recordings from these six places into six pieces; each
piece using material only from that location. Some of the sounds are not treated at all, while others are heavily treated, looped and edited. In 'Clear Well', the longest piece here, the looped sound becomes after a while a bit tedious. It has a rhythm-like feeling to it, but it doesn't work; the same goes for the looped voice in the second half of the track. The other five pieces are much better in that respect. The combination of treated sounds and those more pure versions work quite well
here, with some spooky music in 'West Wycombe', the splashes of water in ' Church Cove', mixed with some very deep bass sounds, or the collated sounds of 'White Scar', going from very quiet, via
birds sounds (inside a cave? Apparently) and ending with what seems a jackhammer. That sees a return in 'Blue John', which also ends on a rather noisy trail. Throughout this is a most enjoyable
trip down into the caves here, with the occasional miss.
Frans De Waard -Vital Weekly www.vitalweekly.net/1185.html

"I stumbled on this searching for field recordings and it lured me in with a false hope of ASMR trickling water and Famous Five smuggler’s cave innocence. Turns out Dave Clarkson has recorded sounds from caves with “Some left pure, some processed, some mangled, some untangled”. I was disappointed at first as I was all about the pure, but the mangling turned out to be more gripping after all. Clear Well has a human percussive echoey water drop effect that sounds like it’s from the mind of the Radiophonic Workshop’s John Baker, with added drones and distant chants."
Moo Kid
mookidmusic.com/2019/06/03/all-the-right-noises-may-2019-in-20-tracks/

If you like A Pocket Guide to Subterranea - Mysterious Caves of the British Isles, you may also like: